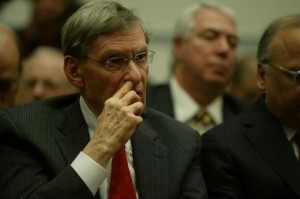 In a move that should come as a surprise to nobody, Bud Seligh announced the push to expand the MLB playoffs is moving forward. Under the proposed format, there would be two wild card teams from each league that would play each other for the right to advance before the divisional series would begin. Selig also wants to expand the divisional series from five to seven games, ensuring a playoff that would push well into November. There is also no talk of reducing the regular season at all.

As much as I love baseball, I’m not sure how much more blood they can squeeze from a stone. Baseball isn’t the brutal battle that football or hockey are, but it is a grind. Playing 162 out of 180 days requires a certain amount of endurance, and by the end of the season players are worn down. I’m also not sure anyone wants to see a baseball game snowed out (although it has happened before).

Rea$on$ for the expan$ion of the playoff$ were not officially announced.