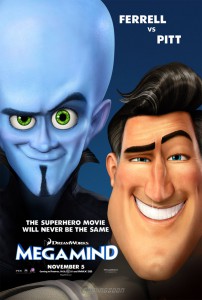 To be honest the first teaser trailer of this looked kind of lame. There just wasn’t that much humor in it, and it looked like kind of a rehashed idea. However, with each subsequent trailer that has come out for it, I have been more intrigued. This extended trailer has me absolutely excited for the possibilities of this movie.

I don’t have trouble admitting that I like a good children’s film. In fact some of my favorite movies this year have been primarily marketed towards a younger set. (How to Train Your Dragon, Toy Story, and Despicable Me.) I’m very interested to see how children react to Brad Pitt’s character Metroman being killed by Will Ferrell’s Megamind. I’m sure that much of the first part of the film will consist of how much Megamind is bullied by Metroman, but still death is a pretty foreign concept in a story like this.

I’m really digging the voice acting in this, especially since Will Ferrell’s brand of overacting perfectly suits him for voice acting.

Megamind is the most brilliant supervillain the world has ever known. And the least successful. Over the years, he has tried to conquer Metro City in every imaginable way. Each attempt, a colossal failure thanks to the caped superhero known as ‘Metro Man,’ an invincible hero until the day Megamind actually kills him in the throes of one of his botched evil plans. Suddenly, Megamind has no purpose. A supervillain without a superhero. He realizes that achieving his life’s ambition is the worst thing that ever happened to him. Megamind decides that the only way out of his rut is to create a new hero opponent called ‘Titan,’ who promises to be bigger, better and stronger than Metro Man ever was. Pretty quickly Titan starts to think it’s much more fun to be a villain than a good guy. Except Titan doesn’t just want to rule the world, he wants to destroy it. Now, Megamind must decide: can he defeat his own diabolical creation? Can the world’s smartest man make the smart decision for once? Can the evil genius become the unlikely hero of his own story?