Exclusive Clip from Inglorious Basterds – MTV Behind the Screen 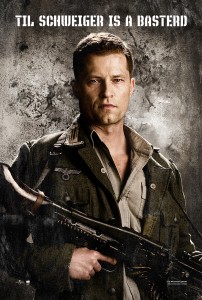 This video of Quentin Tarentino’s newest film, “INGLORIOUS BASTERDS,” is one of three from the first episode of MTV’s new “Behind the Screen” movie show. In the clip, Lt. Aldo Raine (Brad Pitt) unsuccessfully questions a captured Nazi on troop positions. Once it’s clear that the prisoner won’t be talking, Raine turns to his heavy: an angry, baseball bat-wielding Jew named Donnie Donowitz (Eli Roth) who has a couple of bones to pick with the Third Reich.

About INGLORIOUS BASTERDS: In German-occupied France, Shosanna Dreyfus witnesses the execution of her family at the hand of Nazi Colonel Hans Landa. Shosanna narrowly escapes and flees to Paris, where she forges a new identity as the owner and operator of a cinema. Elsewhere in Europe, Lieutenant Aldo Raine organizes a group of Jewish soldiers to engage in targeted acts of retribution. Known to their enemy as “The Basterds,” Raine’s squad joins German actress and undercover agent Bridget Von Hammersmark on a mission to take down the leaders of The Third Reich. Fates converge under a cinema marquee, where Shosanna is poised to carry out a revenge plan of her own…

To learn more about Tarentino’s “INGLORIOUS BASTERDS”, check out the official website at http://www.inglouriousbasterds-movie.com/