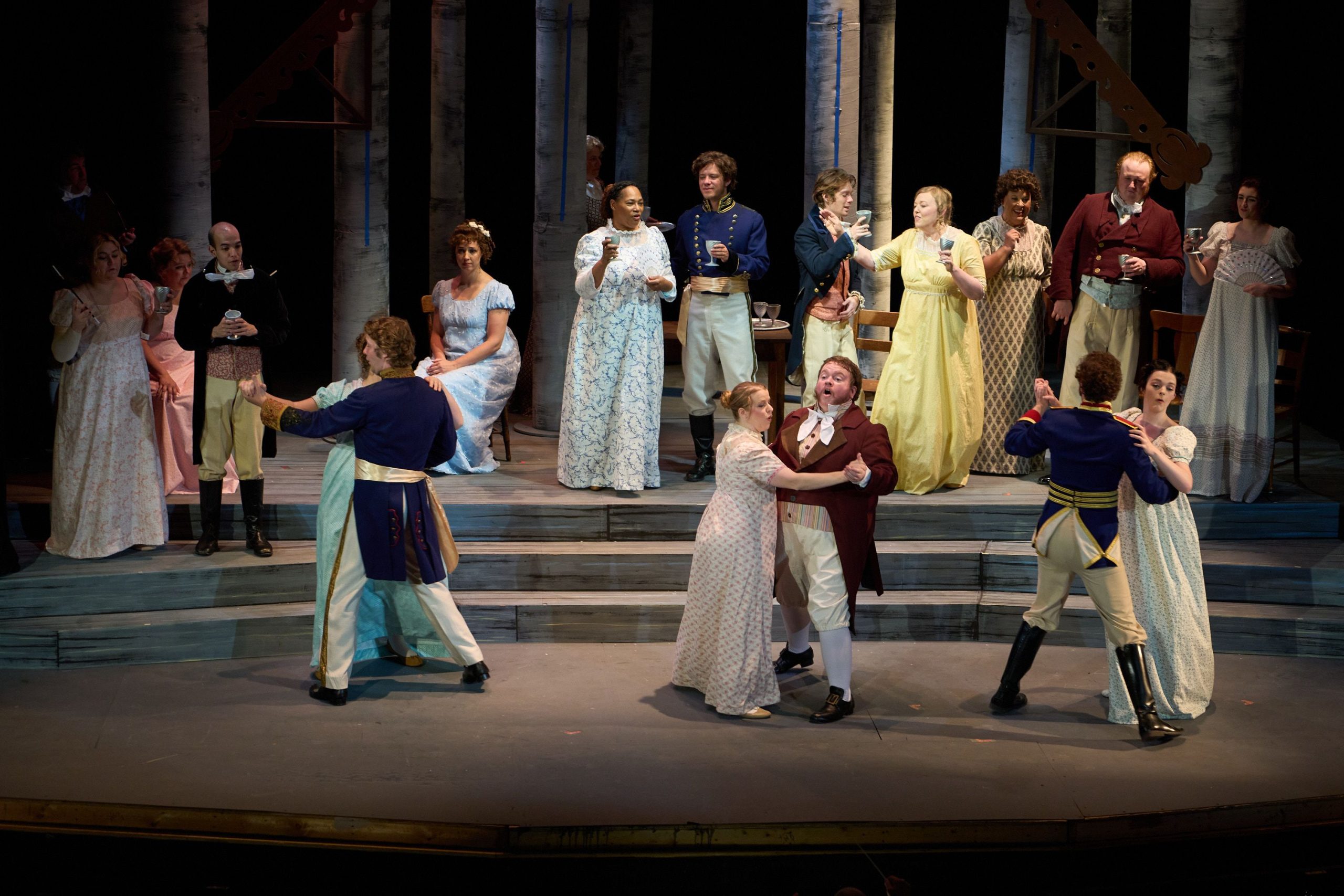 Opening the 28th season in their home for the first time in over two years, Union Avenue Opera is filled with a renewed sense of energy. This vitality is especially apparent in the season’s opener, Eugene Onegin, an intense production filled with incredible performances and beautiful music.

Based on Pushkin’s novel, Eugene Onegin is set in the gardens, mansions, and country houses of 19th century St. Petersburg. There, Tatyana, a girl from the country falls hard for her family’s neighbor, the dashing Eugene Onegin, an aloof aristocrat who initially has eyes for her sister Olga.

Sharing her passion in a letter, Tatyana’s hopes for love are briskly dismissed by Onegin. As act two opens Onegin makes his move by dancing with Olga. An infuriated Lensky demands retribution for his humiliation and challenges his rival to a duel. From here Onegin’s life takes a perilous downturn, forcing him to flee St. Petersburg.

Four years later a downtrodden Onegin returns home and attends a ball. There he meets Prince Grimina and his wife, Tatyana. Surprised to discover she is wed to the prince, Onegin becomes instantly smitten. Wrestling with inner turmoil and a new appreciation for the woman whose love he rejected an enchanted Onegin declares his love for her, only to find that his moment has passed.

The talent of the ensemble is staggering. Zoya Gramagin leads the way with a transfixing performance as Tatyana. Alone onstage for a large portion of the first act, she is a commanding presence.

William Davenport’s amazing voice and emotional gravitas make him ideal as Lensky. Melody Wilson is also stellar as his beloved Olga. Robert Garner gives Onegin an emotive complexity as he balances the character’s selfish, narcissistic, and tragic tendencies into an embodied form.

UAO’s excellent Eugene Onegin is stuffed with an abundance of longing and turmoil. Director Octavio Cardenas’ has created a full-throttle drama that gives audiences a stunningly powerful experience. Joining him is artistic director and conductor Scott Schoonover, whose musical agility balances waltzes, folk tunes, and potent arias with perfect symmetry.

Together, their interpretation of Eugene Onegin is poignant and moving. Fearless and emotionally gripping, it captures the crux of Tchaikovsky’s opera, making for a top-notch production filled with heavy doses of lust, love, jealousy, and regret.