Entire Cast of “Jersey Shore” Signed on for Third Season 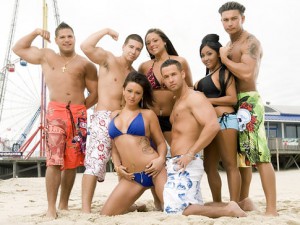 In a sure sign of the upcoming apocalypse the cast of MTV’s Jersey Shore has been signed on for a third season.

“MTV is pleased that the Jersey Shore cast are returning to Seaside Heights to continue production on Season 3,” the network said in a statement.

“Not only have they become a part of the MTV family, but fans worldwide have fallen in love with them. Stay tuned for Jersey Shore Season 2 on July 29th.”

High profile cast members Snooki, JWoww, and The Situation already received raises from $10,000 per episode to $30,000 per episode from the first to second season, no word on if the stars of the show got their pay bumped again in the recent contract.

I can understand why MTV wants to continue, the show is cheap to produce, and it has decent ratings for an MTV show. What I can’t understand is why people watch it. I have never seen a single episode, but I’ve seen enough clips to make me want to stab my eyes out with rusty pokers every time one is shown.