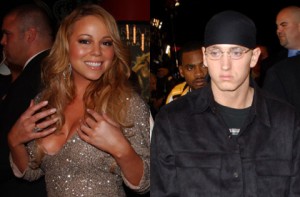 After the release of Mariah Carey’s song “Obsessed,” Eminem has decided not to play nice, and has released a new song in the usual Eminem fashion to strike back with everything he has.

From EW.com –
“I’m ‘Obsessed’ now?/Oh, gee, that’s supposed to be me/In the video, with the goatee?” That’s one of the only printable portions of Em’s angry lyrics. Then he goes all “b—-, shut the f— up!” and starts talking in graphic detail about his own sexual mishaps, as well as making some vague blackmail attempts: “It’s a warning shot/Before I blow up your whole spot/Call my bluff and I’ll release every f—ing thing I’ve got/Including the voicemails right before your flipped your top.” Yeah, I’m assuming those are the same alleged voicemails he was talking such a big game about in 2003. Also, in addition to an assortment of not-nice slurs, Em refers to Mariah as “Mary Poppins” at one point, for some reason?

Listen to “Warning” below: