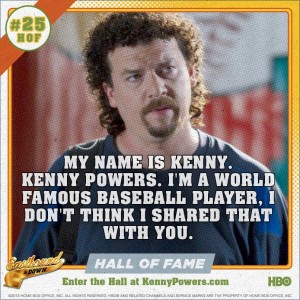 This week’s Eastbound and Down featured the return of Kenny’s loyal servant Stevie, who is barely making a living as a music teacher with four children. The pair are at odds when the show begins, in a hilarious face-off in Stevie’s kitchen. But, just when you think the two have waged war against each other, Stevie returns to his worshipped companion to give him an attitude boost.

Kenny really needed the boost this week, after failing miserably at his attempt to be a sports talk show host. When first appearing on Sports Sesh, Kenny is eaten alive by co-host Dontel Benjamin, who paints Kenny as a blatant racist, redneck live on the show. After his verbal beat down, Kenny looks the most vulnerable he’s ever been. It’s the first time the viewer may actually feel sorry for the pompous ass that we have all grown to love.

But, much like his baseball career, when Kenny failed, you just knew that he would somehow return to glory. He did just that after his wife, April, let him know that she was 100% behind him. Just before their encounter at the TV studio shortly before his second show and attempt to slay the evil Benjamin, Powers’ purchased an $80,000 sports car. It’s hard to believe he could get a loan, after being denied for a swimming pool, but viewers are willing to forgo that formality.

After a little pep talk from Stevie and April, in which April tells Kenny to “F sh*t up,” Kenny takes down Dontel before a live studio audience. Sports Sesh is apparently cool with the frequent use of the “F word.”

Now that Kenny has taken down the evil Dontel, it will be interesting to see where the show goes with his sports show co-host job. There’s no doubt that Powers’ will wreak havoc over the show in only the way that Kenny Powers can. It’s sure to be an interesting season, now the Powers’ is back in the spotlight, and has his flamboyant, rude attitude back in full effect.