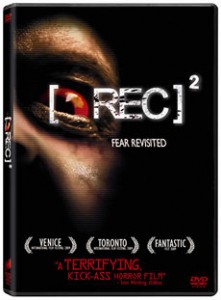 Picking up almost immediately after the events of [REC], we follow a SWAT team and a medical officer as they venture into the contaminated apartment building from the first film. With cameras in tow they attempt to stop the infection before it spreads beyond the building.

When I saw [REC], the first film, I was blown away. It was about as solid of a zombie flick as you can get. It had the right amount of suspense, action, solid timing, and enough gore to keep most horror fans clamoring for more and more is what we got. This time around we can take everything from the first film and beef it up enough to keep a meth addict’s attention. In [REC] 2 we only get a few minutes of calm before the storm. The pace from there on out is relentless to say the least. In fact, complete pandemonium would be a better description.

Fairly early on the movie takes a bit of a turn from the first film regarding an explanation of the events.  I dug the religious angle and went right along for the ride. [REC] 2 has everything you’d expect from a horror sequel: a bigger budget and far more blood & guts. When it comes to the acting, Dr. Owen (Jonathan Mellor) and Ángela Vidal (Manuela Velasco) are the standouts here. The rest of the cast begin to be a bit irksome and cliché as the film progresses. The film does boast a pretty high “popcorn value”—purely entertaining without a whole lot beneath the surface.

The frenetic pace doesn’t leave much room for getting to know these people and given some of the characters, I am perfectly ok with that. Between the annoying kids and the frantic Larra (Ariel Casas), I was checking my watch just waiting to see these people to become zombie food. The film is pretty ripe with standard horror clichés as well. There are a few moments where I had to facepalm at the embarrassingly stupid things a couple of characters did. The biggest problem I had with [REC] 2 is that it isn’t nearly as scary as the first film. I appreciate the directors trying to incorporate various points of view here via other handheld cameras but it really detracts from the horror element. Coupled with annoying and underdeveloped characters, it seems a bit lacking in the scares department. That’s not to say that it isn’t without its suspenseful moments. Just don’t expect it to live up to [REC] in that capacity.

What’s the deal with the ending? Did Balagueró and Plaza finish watching PARANORMAL ACTIVITY and say, “Hm, I like what they did there. Let’s do the exact same thing.”

Picture: Widescreen Anamorphic 1.85:1. For a DVD shot with a shaky cam, the picture transferred very well here. There are a few parts where it looks a bit hazy and muddy, but that is to be expected considering the way it was shot.

Note: This movie is subtitled. No English dub is available here.

Extras: Behind the Scenes Featurettes (53:38) – In place of a commentary we get a very thorough look at behind the scenes. The directors go through and show the scene construction behind a few of the more pivotal scenes. A Walkthrough of the Set – The walkthrough really feels like a glorified behind the scenes. In fact, I am surprised this wasn’t just included in the Behind the Scenes Featurettes extra. Sitges Film Festival Press Conference (10:59) – This is a Q & A session that  really gives more insight into what the directors were going for and is certainly worth a look. [REC] 2 on Tour (8:40) – It’s basically the cast going to different premieres. I’m not entirely sure what they were going for here but it’s pretty useless. Deleted and Extended Scenes – Nothing really important was lost in the cutting room it seems. These scenes felt more like filler which is the last thing they want with a film of this pace.

All said and done, my gripes are small and this film is definitely a viable sequel to the original. There’s a bit of spotty characters and a general lack of scares, but it makes up for it by setting a very fun pace and by throwing a rather interesting angle on the infection our way. If you can get past a few minor things you will certainly have a good ride through this fun movie.