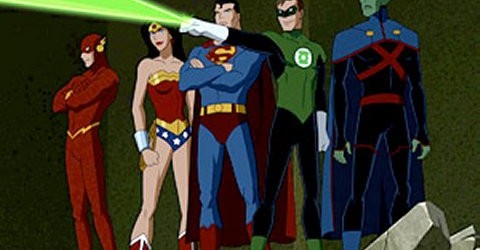 “Justice League: Doom” is the newest addition to DC’s slate of animated films.  It has a lot of positives going for it including the action, voice acting, animation, and plot set up.  Unfortunately, there are a few key components that will keep this film from being enjoyed by more casual fans of the Justice League.  But if you have been a fan of any of DC’s previous efforts then you will not be disappointed with the latest installment.

The plot line is simple.  Vandal Savage has decided that he is going to take over the world by putting the Justice League out of commision, if not permamnently, for a very long time.  How exactly would you take down Superman, Wonder Woman, Flash and the others all at one time?  Of course Batman would know.  He has created contingency plans to take down all current and past Justice League members just in case any of them would go rogue.  Who will step up to save the League and will there be enough time to stop Savage’s plan of attack?

I love the set up of this film.  Batman is an outsider and will never trust anyone outside of a select few.  That fact is particularly showcased here when the League discovers that Batman’s plans are working against them all.  The story also gives a little bit for every fan of a particular character. though not much.  I feel this is both a positive and a negative.  Yes, we do get each member and one of their enemies in a fight, but it is not enough for any one character.  I know plenty on Batman, Superman, and Wonder Woman.  But my knowledge on Martian Manhunter and Green Lantern’s villains are just not there, and this film does not help me learn any more on those characters.  They are only there to provide an obstacle for our heroes.

The voice acting is always one of the best parts on any Bruce Timm production.  Andrea Romano has nailed these characters perfectly.  This time she brought back all of our favorite voices from the animated tv series.  The only switch in Nathan Fillion in as Hal Jordan/ Green Lantern, which was a highlight for me.

My biggest complaint is that the film is missing a second act.  We are given the set up and fights to take down each of our heroes.  And then we are given the fight at the end.  There was definitely more possibility to explore the repercussions of Batman’s actions with the rest of the League.  Overall, the film feels more like an extended episode of the tv show.  Not a problem for me.  I watched the show religiously and just love seeing these characters in action.  But a casual fan will not get nearly the enjoyment of the film.

The day that a new DC Animated film comes out is always an exciting time for me.  DC and Bruce Timm have created something very unique.  For the past several years they have released animated movies of some of the most beloved DC comics.  Some is a comic fans dream because Bruce Timm has proven time and agian that he loves this material with his work on “Batman: The Animated Series”, “Superman: The Animated Series”, and “Justice League: Unlimited”.  There is one glaring problem with this whole scheme which is that they are targeting a very specific audience.  I only hope that they continue to churn out great work so that this series of films can stay in stores.  So if you are a fan of any of these characters, do yourself a favor and pick this up in stores now.