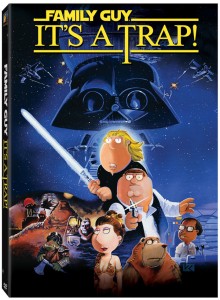 As an avid fan of the television series Family Guy and an even more avid fan of the original Star Wars trilogy, few combinations could be as alluring as the recent Family Guy spoofs of the original Star Wars films. Beginning with Blue Harvest, the Family Guy characters took on complementary roles in the Star Wars universe and paid homage to the timeless story of Luke, Leia and Darth Vader. What began as a labor of love turned more commercial as Seth MacFarlane and the Family Guy team unveiled their version of The Empire Strikes Back in Something, Something, Something Dark Side. The third and most likely last installment It’s a Trap! chronicles the events of The Return of the Jedi. Let me start this review by saying that the title is about the only thing It’s a Trap! gets right.

Starting with the iconic opening crawl, writer Seth MacFarlane “discloses” that neither he nor the Family Guy team really wanted to make this third installment because they were “exhausted” – this apparently was not a joke. The 56-minute episode plays out as the other two have, reliving the original Star Wars films with Family Guy characters in their place. Han Solo is frozen in carbonite at Jabba’s palace as Luke, Leia and Lando try to rescue him. The story needs little review as virtually anyone interested in this spoof would at the very least be aware of the story in The Return of the Jedi; this of course means execution is the key.

The execution is precisely where It’s a Trap! falters. Filled with more chuckles than audible laughs, the jokes seem lazy, as if the writers took one swipe at the original script and never attempted to edit or re-write any of the jokes. A few moments in the episode land a solid belly laugh but never enough to feel that this was the best the Family Guy team could put together. For a franchise built off it’s “outside the box” self-aware style humor, It’s a Trap! takes it a step too far – with constant references to other Seth MacFarlane creations, overly repetitive sight gags and even another Conway Twitty appearance, there are simply too many instances where it appears that the writers are just killing time.

In fact, this episode is so far beneath even the current wavering standard of the television show that it begs the question: Is Seth MacFarlane trying to wage war with Fox in plain sight by releasing sub-par material such as this…why else would he have picked such an obscure and otherwise irrelevant line from original film to name this episode after or is Mr. MacFarlane simply trying to see how much he can get away with…unfortunately it seems either is possible.

-Worth somebody else’s money-

Love the episode? Hate it? Leave your comments below.