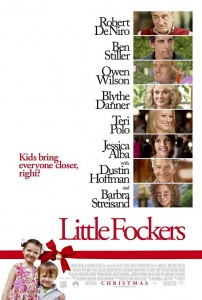 Little Fockers greatly improves over the abysmal second act of this trilogy, but while I was consistently chuckling along the way, the film lacks any innovation with little we haven’t seen before in the genre; or series.

Greg and Pam Focker have had a set of twins and they are close to celebrating their latest birthday which means the Focker/Byrnes families are about to be reunited.  To Greg’s surprise, Jack, his ex-CIA father-in-law, is interested in promoting Greg to the level of GodFocker; which means he will be the heir to the Byrnes family throne of sorts.  As the two bond over their strengthen partnership Jack’s always sneaking suspicions begin to re-arise as he catches wind of Greg’s new friend Andi.  Andi is a hot pharma rep that is recruiting Greg to speak on behalf of her companies erectile dysfunction pill for heart patients.  Sure enough and game of cat and mouse ensues and Greg is left fending off Jack, a returning Kevin, and maybe even Andi.

The film isn’t really filmed with all the many surprises but the script steadily keeps the laughs coming even if we see them coming from a mile away.   Whether its a gross out gag, Owen Wilson spouting pseudo philosophizing, or Dustin Hoffman being Dustin Hoffman there are a variety of laughs to be had, just nothing all that original.  Though, I don’t think I have seen a gag like the one they pull off surrounding a longer than four hour erection.

The film also has way too many characters floating around and by the end too many plot lines that goes nowhere.  Kevin’s plot line goes nowhere and only serves as bringing back the other guy plot point from the original.  The women of the Focker and Byrnes’ marriages are pushed to the background and have next to nothing to do.  Dustin Hoffman and Barbra Streisand are barely in the film and the former is someone I would have liked to see far more of.  Alba’s character is the crux the film’s conflict but as more and more famous faces pop up on the screen you can’t help but feel like things needed to be tightened up.  While the film is mainly a dance between Greg and Jack, they try to slid in just a bit to much where they should have just cut this thing down to its core.  The title barely makes sense as well because the said little Fockers do nothing but have a birthday party and experience trauma.

The actors in the film are all having a good time but no one shows off anything we haven’t seen before.  The most fun and exciting character is Alba’s crazy portrayal of Andi as she is almost too bubbly and will for sure annoy most.  Everyone else plays theirs characters right in line to what we have seen before with De Niro and Wilson providing the most laughs.  Again, Blythe Danner and Teri Polo have little to nothing to do in the film and that isn’t really their fault but they aren’t interesting either.  Hoffman is great in his limited role and I wish their was more, but Streisand is again given nothing to do.  Seems to be quite the boys’ show, even the little boy Focker gets the most attention of the two; by far.

In the end, Little Fockers supplies the laughs but little surprises.  The women get the shaft in the picture unless you look like Jessica Alba which kind of goes against the message of the film.  If you are a fan of the series I am sure you will enjoy this as it might be the most I laughed out of any of the three installments but there are plenty of better comedies out there for you discover this year.

Little Fockers is a C