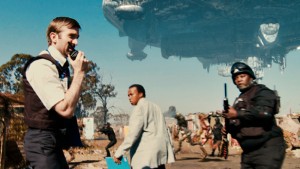 Scifimoviepage.com had an exclusive interview with Neil Blomkamp, the impressive newcomer who directed the Peter Jackson produced alien flick, “District 9.” In the interview, Blomkamp said that SONY is already asking for a sequel.

District 9 takes place in Johannesburg, South Africa – where aliens have landed some time ago, and the humans have forced them into camps to live. The film has a great story, and the idea is truly original as far as alien movies go. And the visual effects are incredible for the budget that they had – only $30 million for the entire movie. Peter Jackson’s FX company, WETA, is responsible for the special effects in the film which are top notch.

Listen to the entire interview with Neil Blomkamp here

Feel that District 9, the Peter Jackson-produced sci-fi box office hit about alien refugees in Johannesburg, South Africa being made to live in squatter camps has too much of an open-ended ending? Then don’t fear. According to director Neill Blomkamp the studio already “wants” a sequel!

And who can blame them? Boasting some impressive special effects by Jackson’s WETA outfit, District 9 was made for a mere $30 million and has already scored an impressive $37.4 million at the US box office over the weekend making it the number one hit, edging out GI Joe: Rise of Cobra to the number two spot in the process. (In contrast the budget for GI Joe was rumored to be $170 million!)

In an exclusive interview on August 18th, 2009 with The Sci-Fi Movie Page, the director admitted that they were already joking about “District 10”!

Even though he wrote District 9 with no sequel in mind, Blomkamp admits that he has “an inclination of an idea” for one and would definitely be interested in directing the sequel.

Although it is obviously early days, this talented 29-year-old South African-born director who worked in advertising before making his directorial debut with District 9 dropped some tantalizing hints: It would seem that Blomkamp is more interested in it being a sequel than a prequel, which would again be set in South Africa and star Sharlto Copley as Wikus van der Merwe again. “Does Wikus become human again?” is one of the plot issues which Blomkamp feels can be explored in a possible sequel.

That doesn’t mean that Blomkamp is ruling out a prequel. He admitted that he finds van der Merwe’s character to be “hilarious” and more fascinating before his redemption in the movie. District 9 star Sharlto Copley who plays van der Merwe echoes these sentiments and says he’d love to play a younger version of the character.

In his interview Blomkamp speaks candidly about his experiences on the Halo movie which he was supposed to have directed with Peter Jackson (Lord of the Rings, King Kong) producing, noting that his involvement in the project is “dead” and that he probably wouldn’t direct it even if someone asked him to. He did however add that he would like to see Spielberg make it into a movie, depending on who he gets to direct it of course.

He tells that $11 million were spent on preproduction costs before the Halo movie were canned and that they even did research on topics such as whether handguns would actually fire in outer space. (The answer, surprisingly, is yes.)

Next up for the director when he gets back to Vancouver is (you guessed it) a sci-fi project, which is in its very early stages. Unlike District 9 this one will be set on a “different planet, way in the future.” Will Peter Jackson be involved? Blomkamp can’t say, adding that The Hobbit is keeping the famed New Zealand director very busy right now. But he adds that Jackson will definitely be involved with any District 9 sequel.

Sci-fi Movie Page webmaster James O’Ehley has the following to say about his interview with Blomkamp: Blomkamp is an exciting new talent in Hollywood, or at least Canada then. (The director moved to Canada from South Africa at age 18.)

Unlike the Baby Boomers such as Spielberg and Lucas and fortysomethingers such as Peter Jackson himself, Blomkamp only turns 30 later this year, which means that he grew up with a totally different set of influences than many of the directors and creative people who has dominated genre output in Hollywood over the past few decades. To illustrate: Peter Jackson may have been hugely influenced by watching the original 1930s Black & White King Kong on television one night, but the chances are that a youngster such as Blomkamp with easier access to DVDs and videogames would instead be influenced by the likes of Spielberg, James Cameron and instead.

One can see the influence of several ‘Eighties movies in District 9: Wikus (Sharlto Copley) pulling off his fingernails like Jeff Goldblum did in David Cronenberg’s 1986 remake of The Fly and the Robocop-inspired ultraviolence of the movie’s climax in itself which people get literally blown apart by alien weaponry. The premise behind District 9 is taken from a 1988 movie titled Alien Nation.

Blomkamp is “one of us”, by which I mean that he loves movies and he loves science fiction. When I showed him a copy of Fantastique, the newly-launched English version of the long-running French print magazine I also work for, he eagerly asked me if he could keep my copy. (How could we refuse him?) Our interview was all too brief as we touched on anything from George Lucas’ expectations of the original Star Wars (he was convinced that it would flop!) to how Hollywood often gets science just plain wrong in their movies.

Blomkamp believes that if we were to really make contact with aliens one day, it would be on their terms not ours. After all, anyone who has the technology to travel millions of light years to our planet wouldn’t let themselves be shoved into squatter camps. Maybe he’ll make a documentary about how Hollywood gets science wrong, the young director mused. It doesn’t matter what he makes. We will be the first in the row to go see it!

Everyone here at ReviewSTL loved “District 9.” I think I can safely say that we are all excited to see what happens with the next film – whether it be a sequel or prequel. If you haven’t seen “District 9” yet – go see it today!!