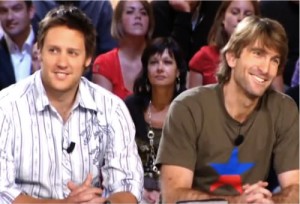 Three years ago if you had asked someone who Neill Blomkamp and Shartlo Copely, it would have been quickly greeted with, “Who?” Although, many people on the street might still utter the same response, I wouldn’t expect it to stay that way. The two have now become a hot Hollywood commodity with the surprising critical and commercial success of the 2009 sci-fi flick, District 9.

Once again Copely and Blomkamp will be teaming up for a sci-fi adventure. This time the film titled Elysium takes place on another planet, and is set in the future. So, at first glance it doesn’t appear to share a lot with District 9, but I would expect many allegorical plot points just like its predecessor.

While their previous film was down outside of the studio system, this one Blomkamp and Media Rights Capital are shopping around town. Media Rights Capital has a distribution deal with Universal, but Universal has yet to sign onto the project. I would take a guess that it won’t be long before Blomkamp and company find a distributer. If they can once again do a cutting edge sci-fi on a smaller sized budget the outcome could be very similar.

I’m excited to see this one. I really enjoyed District 9, and I was very surprised when the film held up so well on a second viewing. Let’s hope they can make another solid release. The world needs more sci-fi that is taken seriously.