Extra! Extra! Read All About It! 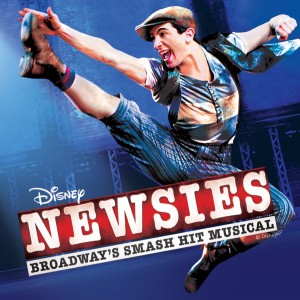 It has been probably twenty years since I watched the 1992 film Newsies, starring a 17-year-old Christian Bale as Jack Kelly – the leader of what would become known as the “Newsboys Strike of 1899.” Aside from starring the future Oscar-winning actor, and being directed by Kenny Ortega, there isn’t much I remember about the box office failure – which recouped less than $3 million dollars of its $15 million budget. However someone at Disney believed in the potential of the story, and the fantastic music of Alan Menken, and in 2011 it opened at the Paper Mill Playhouse to critical acclaim. In 2012 it would land on Broadway, winning Tony Awards® for Best Score and Best Choreography. And now the national tour is making its way around the country, and has landed at the Fabulous Fox Theatre in St. Louis. 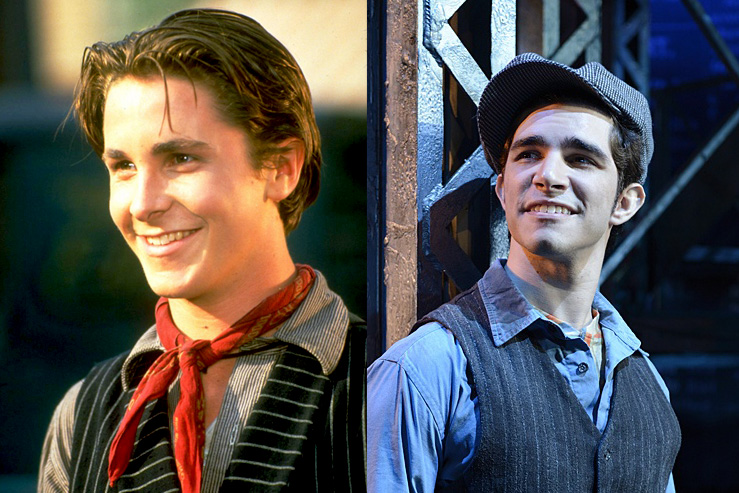 The stage production shares a very similar story with the feature film. Taking place in 1899, this version ditches the Newsboys Lodging House for the rooftops of New York City, where Jack Kelly (Joey Barreiro) and Crutchie (Iain Young, who usually performs the role of Finch, did a fantastic job filling in for Zachary Sayle) live in their “penthouse” suite. It is here we are introduced to Jack’s dreams of leaving his job as a newsie for “Santa Fe,” where he can live a bigger life in a smaller town. Both the acting and singing talents of Barreiro were instantly apparent, as he belted out the opening number alongside Young. His charisma and magnetism draw you in, and the chemistry of these two actors shines throughout the show.

The opening number Carrying the Banner, featuring most of the company, showcases not only their incredible talents as dancers and vocalists – but also the amazing set. Comprised of three columns, each divided into 3 squares, each vertical tower moves between the front and rear of the stage. The choreography of not only the dance numbers, but the movement of scenic designer Tobin Ost’s fluid stage is extremely impressive. And of course, it wouldn’t be Newsies if we didn’t see all of the cast jumping acrobatically across the stage. Kudos to choreographer Christopher Gattelli for his fantastic work. It’s a great way to kick off the show, and gives the audience a great idea of the fun in-store.

Meanwhile the head of the New York World newspaper, Joseph Pulitzer (Steve Blanchard) sings about his need to sell more papers, comparing the answer to the way his barber cuts his hair in The Bottom Line. After throwing out suggestions to trim costs he sings, “shave me too close and you may slit my throat. It’s the simplest solutions that bolster the bottom line.” He plots to charge the newsies an extra 10 cents per hundred “papes” they purchase. They would have to sell an additional ten just to break even, meanwhile increasing his profits at no additional expense. While some of his staff comments that it will make life harder on the young boys, Pulitzer turns it around as doing them a favor – teaching them a valuable lesson in economics, that will have them “begging to pay even more!” 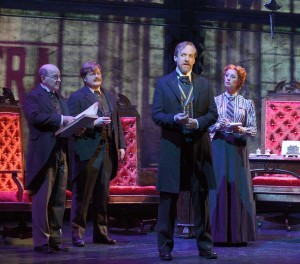 Blanchard’s performance as Pulitzer is masterful. Although he doesn’t fly through the air like the newsies do, he was one of my favorite parts of the show. A Brodway veteran (Beast in Beauty and the Beast, Camelot, A Christmas Carol, The Three Muskateers), the actor is no stranger to the stage. His villainous baritone vocals and confident body language are truly commanding as the greedy newspaper mogul. His experience as Beast on Broadway no doubt had a wonderful influence on the role.

News of the ten cent increase comes as a complete shock to Jack and the boys, and eventually leads to the events of the real-life Newsboys Strike of 1899. Jack becomes the leader of this impromptu union, and the face of the revolt – leading to hard times for the newsies and altercations with Pulitzer’s thugs and the law. Jack instantly falls for a reporter from the Sun named Katherine (Morgan Keene) who shows up in town, and eventually puts the boys on the front page of the paper. Although making headlines for their cause, they struggle with their loss of income and the trouble which their rebellion brings.

Although the story sat for nearly two decades, Newsies proves to be a wonderful revival of a touching true story – along with fantastic music by the always amazing Alan Menken (responsible for the music of so many Disney classics like The Little Mermaid, Beauty and the Beast, Aladdin, Pocahontas). The songs are fantastic, many of which were featured in the original film. Perhaps it was the subject matter that kept viewers away from the movie theater, but it certainly wasn’t the terrific music that was destined for the stage. Maybe the terrific dancing and choreography is just something you have to see in person to fully appreciate. The talented performers in the show had all 5,000 plus seats of the Fabulous Fox erupting with applause after every number. The complexity of their movements, coupled with the intricate set design, is a sight to behold. 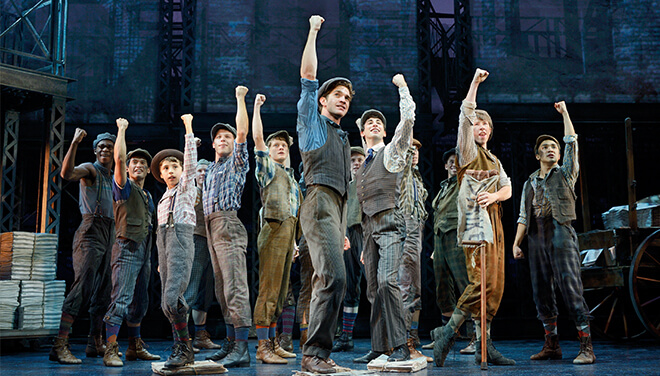 Songs like “The World Will Know,” and “King of New York” will stay with you long after the curtain closes. But don’t just read all about it. Go see it for yourself; you won’t be disappointed.