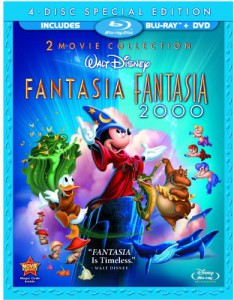 Walt Disney’s animated musical masterpiece is an extravaganza of sight and sound-now brilliantly restored for the first time ever in high definition! Blu-ray technology finally allows you to experience Fantasia-and Fantasia 2000, the triumphant classic it inspired-the way Walt envisioned! Plus, for the first time ever on Blu-ray, experience the 2003 Academy Award®-nominated animated short Destino-the extraordinary collaboration between Walt Disney and legendary artist Salvador Dali!

Revealing new bonus features and commentary bring the Fantasia experience to life, allowing generations of moviegoers all over the world to enjoy this timeless classic like never before. See the music come to life, hear the pictures burst into song and experience the excitement that is Fantasia over and over again.

Here are some of the special features to look forward to on the Blu-ray and DVDs:

In order to enter the contest, become a fan of ReviewSTL on Facebook and suggest ReviewSTL.com to all your friends (click the “suggest to friends” link on the left side of the page). Then post a comment on the ReviewSTL fan page telling us your favorite moment from a Disney movie! NO PURCHASE NECESSARY. PLEASE REMEMBER TO READ THE RULES!