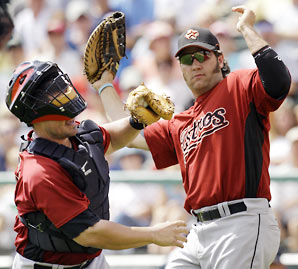 Getting jiggy wit' it.

As my good friend Chris pointed out last night, the Cardinals apparently appear poised to try to rejuvenate everyone’s career.

Fresh off a disappointing stint with the New York Yankees, Lance Berkman has signed a one year deal with the Cardinals worth $8 million. Berkman’s been a pain in the ass for the Cardinals for years, posting some terrific numbers. He’s hit as many as 45 HR in a season and has twice finished in the top 3 for MVP voting.

There are lots of questions, however. Berkman is 34 and is coming off a mediocre 2010 campaign. His knees have been giving him problems, and his bat speed has slowed down. Although he performed decently while batting left-handed (.267, 13 HR, 53 RBI, .847 OPS), his right-handed numbers are simply terrible (.171, 1 HR, 5 RBI, .517 OPS). I wonder if there will be serious discussion to simply keep him hitting from the left side of the plate. Berkman will also roam the outfield, where hasn’t played since 2007. Right now he’s slated to play right field, but more than likely, Matt Holliday will move to right field, allowing Berkman to play left.

St. Louis has had a history of bringing out the best in veterans (see: Clark, Will and Walker, Larry). If Berkman can revert to his 2001-08 form, the $8 million will be a bargain, and the Cardinals will have the best 2-5 hitters (Rasmus, Pujols, Holliday, Berkman) in the NL. It is, however, a risky move. With the Cardinals’ recent signings (trading Blake Hawksworth for Ryan Theriot and signing lefty Brian Tallet), they are doing their best to address their off-season needs. Theriot is a feisty player in the mold of Eckstein, but he has about the same range as David. He’d be much better suited if he starts at second instead of taking Brendan Ryan‘s place, as I consider Ryan one of the top fielding shortstops in the majors, if not the top. Tallet has struggled the last two seasons but in 2008 he did have a 2.88 ERA in 52 relief appearances for Toronto.