Daily Recap: Monday features How I Met Your Mother, Two and a Half Men, 2 Broke Girls, and The Playboy Club

Monday , September 19th was the “official” start to the Fall 2011-12 Television Season and boy was it a good one.

We had the premieres of new shows The Playboy Club and 2 Broke Girls, the premiere of Two And A Half Men without Charlie Sheen, Dancing With The Stars and The Voice in the Reality World, and Castle, How I Met Your Mother, and Hawaii Five-O all coming off of cliffhangers. Next week we have the new show premieres of FOX’s Terra Nova and CW’s Hart of Dixie, and the return of Gossip Girl and Emmy Winner, Melissa McCarthy, and the rest of the cast of Mike and Molly make their returns to Monday Night.

On a side note with my reviews, I try to watch five shows a night and write about them and this season I narrowed it down to The Playboy Club, 2 Broke Girls, How I Met Your Mother, Two And A Half Men, and Terra Nova. I don’t have anything against the other shows I’m just one man and there are only so many shows I can watch and personally, when it comes to Reality, I like to stay loyal to my Reality Competition Shows so The Voice and Dancing With The Stars are out ruled by American Idol and So You Think You Can Dance…just preference, nothing against the shows because I have watched both and they are good shows. When it comes to the other shows, I’ve seen Hawaii Five-O and it started to get repetitious for me so I stopped watching and the others I just haven’t seen or haven’t had any interest in watching.

So, now that you know where I am coming from I can get into “My” shows a little bit more. Just to forewarn you there are Spoilers at this point so if you don’t want to know anything about the before mentioned shows then you should watch the shows and then read the recap….I’m not going to say stop reading because well that’s just bad business on my part! 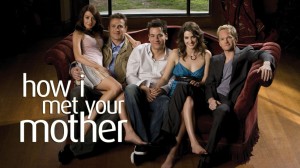 How I Met Your Mother

HIMYM started the season with a double episode that featured the duo of Marshall (Jason Segel) and Lilly (Alyson Hannigan) revealing to everyone that she is pregnant, Robin (Colbie Smulders) coming to the realization that she still has feelings for Barney (Neil Patrick Harris), Ted (Josh Radnor) trying not to screw up Punchy’s (Chris Romansky) Best Man speech, Nora (Nazanin Boniadi) finally returning Barney’s relentless phone calls and agreeing to meet up with him, Marshall finally getting a new job working for Garrison Cootes (Martin Short), the development of Marshall’s new persona Beercules, Ted realizing that everything he has done has been for nothing and he changed his views on dating….somewhat, and just when you think Ted has changed for good a ghost from his past, Victoria (Ashley Williams), returns to throw him in a complete loop.

All in all they were both very solid episodes and they revealed quite a bit as to where this season is going to go. They keep flashing to Barney on his wedding day so I am curious if Nora is the woman who breaks Barney of his womanizing ways. I’m certain that Vanessa is not “Your Mother” but I do look forward to seeing how that storyline develops. Marshall and Lilly have been trying for a baby for two seasons now and now that she’s pregnant I wonder how they will react to the baby. I don’t know what they are going to do with Robin now that she seems to be the odd one out but it always seems like at least one character is kind of forgotten about each season and I see Robin being that character this season. Martin Short on the show should be amazing because he is comic gold wherever he goes and he already had me going in his first appearance on the show. 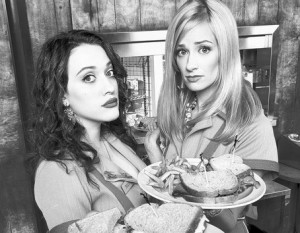 I think I’ve been looking more forward to 2 Broke Girls over any of the new Comedies that are hitting the scene this Fall Season.

2BG premiered following the much anticipated debut of 2AAHM and it started off with Max (Kat Deenings) showing off her wild side with a spirited speech about snapping with a customer at the diner that she works at. Enter into the scene Caroline (Beth Behrs), who is the daughter of a once very powerfully man, but when that man was caught in a scandal that landed him in jail Caroline and her family were left with absolutely nothing and Caroline gets a job at the diner. Max doesn’t really take a liking to Caroline at all but she gets through that and they develop a very odd relationship. When Max finds Caroline sleeping on the subway, she takes her to her apartment and tells her to stay there, but when Max’s boyfriend immediately hits on Caroline their relationship is put to the test.

2 Broke Girls is a very solid show and I am looking forward to the upcoming season of it. The team of Kat Deenings and Beth Behrs leads to some very comedic situations and I am in hopes that this show lasts for a long time (that is if they can keep the episodes as good as the first one). Deenings really makes this show worth watching because you just never know what she is going to say next….think of her character in The 40 Year Old Virgin and you pretty much got it. The show has tons of potential to be the next big show and I can’t wait for the second episode 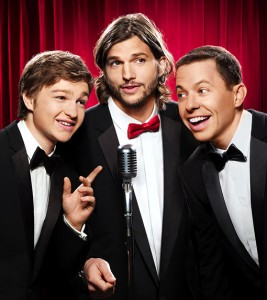 Two And A Half Men

The 2AAHM premiere brought the return of Ashton Kutcher to Network Television and man was it good.

The episode started with the funeral of Charlie Harper and the strange feeling that Rose (Melanie Lynskey) killed Charlie. Next we find out that Charlie actually had no money and the family needs to sell his lovely Malibu Condo, so they decide to have an open house which at first brought guest appearances by John Stamos, and Darma and Greg (Jenna Elfman and Thomas Gibson). After that Alan (Jon Cryer) receives Charlie’s ashes in the mail…via FedEX and starts talking to the urn and decides to spread the ashes on the beach, but when going to do so he is shocked and spills the urn all over the carpet. What was so shocking was the first appearance of Walden Schmidt (Ashton Kutcher), who climbed up the back porch and was in need of a telephone after attempting to drown himself after a tough break up. We learn quick that Walden is nothing like Charlie in that he doesn’t like the taste of alcohol and he is not a womanizer at all….but he still gets both of the girls that him and Alan left the bar with. It is also revealed that Walden is a billionaire for selling his website. At the end of the episode Walden decides that he likes Alan’s house so much that he is going to buy it.

I’ll fully admit that I am not the hugest Two And A Half Men fan but I think that the development of Ashton Kutcher character is the change that the show needed for me to start watching it. I am seeing signs that Walden is going to turn out being very similar to Charlie in a lot if ways. I don’t like how they are putting more focus on Jon Cryer’s character. I think that the show has a lot of potential to be great and I am hoping they do everything to make it a very good show throughout this season. I am curious to see if Rose is going to take a liking to Walden though. 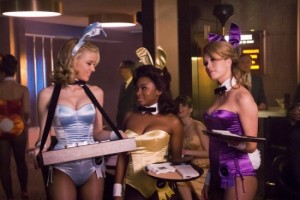 TPC was one of the more talked about shows coming to this Fall and the premiere wasn’t a letdown at all.

TPC focuses on the lovely Maureen (Amber Heard) and the Club that she works at. It is set in 1963 in Chicago and follows the lives of woman that work at the very popular Playboy Club. Things get thrown for a loop when Maureen is attacked by Clyde Hill (Randy Steinmeyer), otherwise known as Bruno and otherwise known as the Mob Boss of Chicago. Nick Dalton (Eddie Cibrian), who is a well established lawyer in the city and a frequent customer of The Playboy Club, eventually comes to the rescue of Maureen but not before she kicks him with her heel and puts a puncture in Clyde’s neck and kills him. Nick immediately decides that they need to dispose of the body and nobody needs to know about this. That leads to Mob Members getting involved and questioning Maureen because she was last seen with Clyde on the dance floor at the club and then Nick gets involved and makes an attempt to clean things up for Maureen.

The Playboy Club was one of the Dramas that I was looking forward to the most and the “Pilot” episode was excellent. They immediately put a focus on a lot of issues from that time like Civil Rights, Woman’s Rights, and Homosexuality, which was something that was a bit of a surprise to me. The writing on the show developed the characters just enough to keep me intrigued and I will be watching this show for this entire season.  I know a lot of NBC affiliates are not airing this show because of Playboys involvement but there was really nothing that would really cause all that much of an uproar in the show….unless they don’t want to show girls in bunny outfits and basically bikini’s but if that was the case then I can think of about seven or eight shows on that network that show worse things than that.

Make sure you come back each and every Monday as I will continue to Review these shows for this entire season. Next week Terra Nova will be added to the list and make sure you check out my Tuesday Recap as I review The New Girl, Ringer, Raising Hope, and Unforgettable.