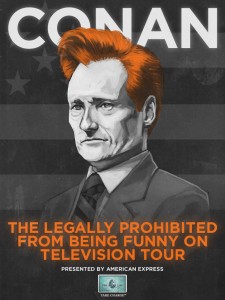 Conan O’Brien recently announced that he was going on tour. (Read our article here.) The former Tonight Show host has titled his tour “Legally Prohibited from Being Funny on Television Tour”. This stems from his contractually obligations that don’t allow him to host a show on TV until September. Luckily Team Coco can get their fill of Conan O’Brien while he is on tour. Unfortunately for us though, he won’t be coming to St. Louis.