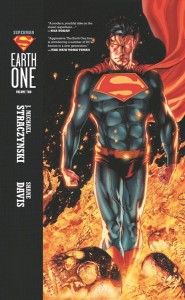 Finally! I can write about a Superman book.  For anyone that knows me, I don’t hide that Superman is MY hero.  He was the first character I ever read, and I knew he was my guy.  He stands for everything that’s good and has the ability to inspire those that need it.  That being said, Superman: Earth One – Volume 2 is one of the worst Superman stories I have ever read (and I was around for the electric Superman). It totally misses everything that makes The Man Of Steel the greatest hero of them all.  The tone is wrong, the main characters are wrong, and this second volume falls flat on it’s face.

Superman is supposed to be an inspiration to people.  In this book, he doesn’t do anything to inspire anyone.  He mopes around and wallows in self pity.  He meets his slutty/hooker neighbor who literally throws herself at Clark when she finds out he’s a writer.  There’s a very uncomfortable scene in which she invites Clark over for dinner and comes out wearing nothing but lingerie (what?).

Then there’s the characterization of Lois Lane.  Lois has always been one of the strongest female characters in DC history, but in this book, she is reduced to nothing more than a pissed off, mean spirited bitch.  She’s hell bent on unearthing the truth about Clark Kent, and she doesn’t care who she hurts or puts down in the process.  In one scene, she is sitting on a couch with her boyfriend.  She decides to dig into Clark’s personnel file and says this to her boyfriend: “The only thing you’re supposed to do is smile, look good on the couch, don’t talk and then leave.”  I’m all for an update to the characters, but this is so far out there that I don’t even recognize them.

J. Michael Straczynski (the writer of both Earth One volumes) has gone on record numerous times stating how much he loves Superman, but it appears he doesn’t know a damn thing about the character at all.  His first attempt at the character was his horrid 14 issue run on the main Superman book.  The story centered around Superman walking the United States (like Kane in Kung Fu).  He has no concept of what makes Superman.  Straczynski seems to think the best stories are when Clark is treated as an outsider, an alien living alone on Earth with nobody to understand him. Both in “Grounded” (the title of his Superman story) and the Earth One graphic novels, he beats that angle like a dead horse.  That’s not Superman.  I can’t wrap my head around Emo Superman moping around complaining about how misunderstood he is.  Straczynski is a very talented writer.  His run on Amazing Spider-Man is what brought me back to Spidey, but his takes on The Man of Steel have left a bad taste in my mouth.  Hopefully, he won’t be doing any more of these.

The bright side of both volumes has been Shane Davis’s art.  I’ve been a huge supporter of his since I first saw his work on Mystery in Space.  His layouts are dynamic, and I love his version of Superman’s suit (yes, he wears the red trunks).  His version of The Parasite was also really cool.  However, I think Davis is better suited for a Batman book with his use of dark colors and heavy inks.  I’m not putting down his style, in fact I love it, but I think he was trying to match the tone of Straczynski’s writing.  Davis is very, very talented, and I’d love to see him on a monthly book. Maybe if he was paired with someone that actually understood who Superman was, his take would be lighter.  Go pick up his work on Superman/Batman and Justice League of America.  Both are great representation of his skills.

All in all, this is failed attempt to make Superman “cool”.  I don’t understand the concept of a dark and brooding Superman.  That’s Batman’s gig.  Superman is the bright light, the one that all the other heroes respect.  If you want a good version of Superman’s origin, there are three books I can’t recommend enough.  The first is John Byrne’s 1987 reboot of the character simply called Man of Steel.  Byrne’s take on Superman was that he is Clark first and Superman second.  He made Superman more human.  The second is Geoff Johns and Gary Frank’s homage called Secret Origin. Their take was everything that I love about Superman including Frank’s version of Clark/Superman based on Christopher Reeve’s depiction.  Last but not least is Mark Waid and Leinil Francis Yu’s Superman: Birthright, an updated origin that had Clark traveling the globe trying to find his place in the world.  All three of these stories are a perfect take on Superman.

Normally, I want to say nothing but good things about the medium I love so much, but sometimes I need to vent a bit.  Tell me what you think about Superman: Earth One – Volume 2.  Did you read it?  If so, what did you think?