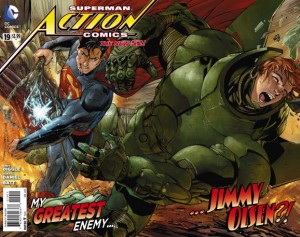 Finally!! Redemption has arrived.  After much suffering at the hands of the creative teams on both of the main Superman books (Grant Morrison/Rags Morales on Action Comics & George Perez/Jesus Merino on Superman), we are finally treated to the new creative duo in Andy Diggle (The Losers & Green Arrow: Year One) and Tony Daniel (Batman & Detective Comics).  The change is coming off of Grant Morrison’s departure from the book, and I will admit I wasn’t sorry to see him go.  Morrison is one of the best writers in comics today, but his take on Superman left something to be desired.

Morrison’s 18 issue run was supposed to center around the younger years of Clark/Superman.  The run started off really well, but it ended with a whimper.  Morrison was trying all kinds of high concept stuff (The Legion, Mr. Mytzlplk, alternate dimensions), and it just wasn’t working.  I’m sure I will catch some flack for my take of a Grant Morrison Superman book, but I don’t think I’m the only one that felt this way.  I was hoping to get something like All Star Superman, but that wasn’t the case.  Now with The Man of Steel set to release in June and two new Superman based books (Superman: Unchained and Batman/Superman) coming out this summer, the push is on to bring Superman back to the forefront.

This new story starts with a flashback to Lois and Clark sitting in a bar in the Middle East.  In the midst of their flirting, Clark gets a message that 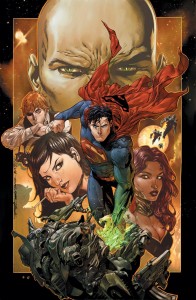 requires his alter ego.  Superman then encounters what he refers to as “War Machines” being controlled by human pilots.  A giant battle ensues, and Superman takes the machines apart with minimal effort.  After the machines are destroyed, Superman pulls the remaining pilot out of a suit and sees that it’s Jimmy Olsen??  As Superman tries to talk to what looks to be one of his best friends, “Jimmy” spontaneously explodes.

The story goes back to Metropolis, and we finally get to see Lex Luthor.  He is in a therapy session and is engaged with the therapist, asking her what his diagnosis could be.  She calls him a genius but adds that he also suffers from malignant narcissism.  Those two things combined make him a sociopath –  psychotic megalomaniac and quite possibly the most dangerous man on the planet.  Luthor, being the villain that he is, calls himself exceptional and  states that the “exceptional can not be judged by the conventional”.  The reader is then treated to the realization that Luthor wasn’t in the doctor’s office, but rather he has the good doctor confined in cell of his making.

As Lex leaves the cell, he lays out his current plan to kill his greatest enemy, Superman.  It turns out that the robots and weapons that were fired at Superman in the Middle East were nothing more than a set up.  Each “Hellstreak Warhead” was tipped with a tiny amount of Kryptonite.  As they hit Superman, they were able to take a copy of Superman’s DNA strands, giving Lex a blue print of Superman’s genetic make up.  Luthor can also recode Superman’s DNA.  In Lex’s own words, “I put a tiny death machine inside him, and he doesn’t even know it.”

Fast forward three weeks, and Superman is flying over Metropolis.  The tiny machines inside Clark receive a new template, and the attack on the Man of Steel’s genetic code begins with his hand being turned into a Kryptonite claw.