Comic Pick of the Week: The Rocketeer: Cargo of Doom 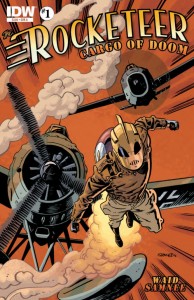 The year was 1991, and I was sitting in a darkened movie theater waiting for another random Disney movie.  Little did I know I was about to fall in love with a movie and character.  Cliff Secord was the lovable loser played brilliantly by Billy Campbell.  I was head over heels for this movie by the credits.

Fast forward 21 years, and I still love everything about The Rocketeer.  IDW has done amazing things since buying the license.  IDW published two four issue mini series (The Rocketeer Adventures & The Rocketeer Adventures 2) in 2011 and 2012.  They also released a complete collection of the original Rocketeer comics from the 1980’s (The Rocketeer: The Complete Adventures).  The collection edition was a tour de force in graphic storytelling.  Dave Stevens (the creator of the character) was one of the greatest artists I have ever seen.  His work was brilliant and beautiful.  In the collected edition, his original work was recolored by Laura Martin and is absolutely gorgeous.  IDW has now brought two of comics’ best creators together for another Rocketeer mini series, and I couldn’t be more excited.

The Rocketeer: Cargo of Doom is a four issue mini series by Mark Waid (Daredevil) and Chris Samnee (Captain America & Bucky).  In this first issue, we get reacquainted with everyone in the life of Cliff Secord and are introduced to the threats our hero will be facing.  A solid first issue that gives everything you’re going to need to know throughout the rest of series.

Mark Waid nails the tone of the character.  The Rocketeer isn’t a dark and brooding hero with no sense of humor.  He’s just a guy who is trying to do right by his friends and girlfriend (whom he is constantly pissing off).  Waid has a way of making you care about what happens to the people in the book.  He’s able to give each person an individual voice.  He also captures the tone of the times by using period (1930’s) appropriate slang.   He’s able to take groundwork laid by Dave Stevens and keep it going.

One of the many things I love about the original The Rocketeer is Dave Stevens’ art.  It’s simply breathtaking.  Chris Samnee is the perfect fit for this new run.  His style has a very old fashioned look, Captain America & Bucky is a good example.  His style is a great fit for the World War II era comics.  Samnee’s version of the characters mimicked Stevens’ work while maintaining key characteristics of Samnee’s style.  The brightness of the book, on the other hand,  is a noticeable change to Samnee’s usual style of dark coloring.  The book largely takes place during the day with only a few dark pages.  It’s something new for Samnee, and I dig it.

If you’re looking for a fun read, then I can’t recommend this book enough.  It’s a perfect balance of humor, action, and suspense.  The writing is great, and the art is perfect.  Any kid of the ’90s remembers The Rocketeer, and Cargo of Doom has everything you loved about the character.