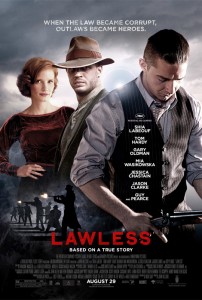 Based on a true story, Lawless recounts the tale of the Bondurant Brothers – and their infamy when it comes to bootlegging and invincibility. In 1930s Franklin County, VA during prohibition, the three Bondurant brothers were at the top of the moonshine game. But when big-time gangsters leave Chicago for their little town, the law follows them – bringing trouble to their otherwise peaceful way of life.

Forrest Bondurant (Tom Hardy) is a man not to be reckoned with. The middle brother of three is the brains of their moonshine operation in Franklin, with enough brawn to boot. Howard Bondurant (Jason Clarke), the eldest brother, was left emotionally scarred from his service during the Great War and acts as the muscle of the group. Then there is Jack Bondurant (Shia LaBeouf) – the youngest, and also the runt of the litter. When it comes to the family business, Jack rarely gets his hands dirty. Chased out of Chicago, a crime wave starts to funnel into the county – bringing government official Mason Wardell (Tim Tolin) and Special Agent Charlie Rakes (Guy Pearce) with them. When the Bondurant Brothers decide not to play nice with the law, trouble starts and a personal vendetta ensues between them and Rakes.

If you are familiar with director John Hilcoat’s previous films, like The Road and The Proposition, you will recognize the gritty, visceral look and feel of his latest film. The story, based on the novel “The Wettest County in the World” by the grandson of Jack Bondurant, follows three real-life brothers whose lives and stories are quite fascinating. Like Hilcoat’s other films, the film is authentic and lacks the over-the-top action that other’s in the genre present – making this film much better. Unlike other “based on a true story” films, it’s actually believable that most of the events in Lawless actually happened. And having never heard the story before, it was quite enthralling to learn of the Bondurant boys.

The acting in the film is top notch, making each of the main characters intriguing and leaving you wanting to know more about them. Shia LaBeouf gives one of his best performances as Jack, the youngest Bondurant who is constantly trying to prove himself to his brothers. His naïveté and charisma makes him quite likable, and has you routing for him to come out unscathed from the dilemma his family gets in. Tom Hardy, without a doubt, steals every scene that he shows up in. Forrest Bondurant is an all-around tough guy who doesn’t take crap from anyone. Although he shows tough love to his brothers, a soft(ish) side starts to show when love interest Maggie (Jessica Chastain) comes to town. Their chemistry is fun to watch as Forrest starts to soften up (which is a bit of an overstatement, but in a good way). Jason Clarke is also a great addition to the film, often drowning his sorrows in a jar of moonshine as he tries to help run the family business.

Other honorable mentions for acting go to Gary Oldman, who makes brief appearance in the film as gangster Floyd Banner, and Dane DeHaan – who plays Jack’s best friend Cricket.

With a beautifully composed mixture of gangster film and western, Lawless has a flavor all of its own. The story of the Bondurant brothers is constantly intriguing, and gives us a unique insight into the bootlegging and prohibition of the 30s. The gritty and realistic feel of John Hilcoat’s direction attributes great character to the film, and makes it one that never loses our interest. With a late August release, the film is quite a pleasant surprise and is not to be missed.

Lawless is an A.