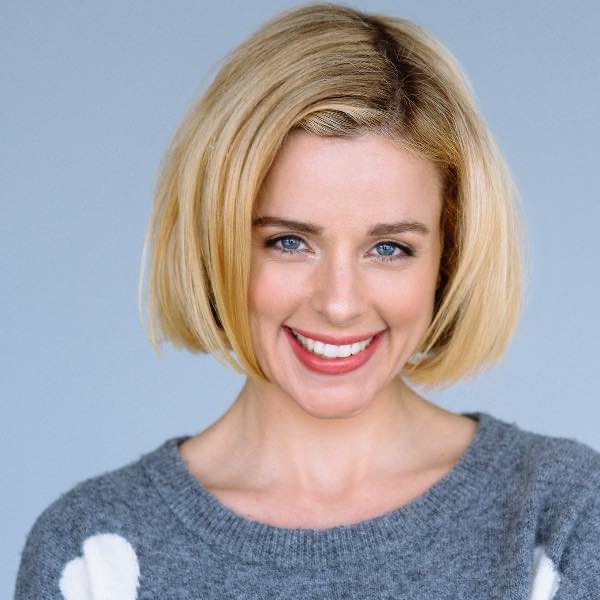 Valentine’s evening was quite a night of laughs at Helium comedy club as headliner Erica Rodes performed a special engagement for the romantic holiday night.

Many couples and duos and even groups of friends gathered around tables with drinks, food, and some with chocolate and strawberries (a VIP package the venue offered,) for a one-night-only show, and what a treat it was.

I was pleasantly surprised as for once, I hadn’t seen any of the comics previous material before entering the showroom. This is a rare thing for most people seeing stand-up live as they are either a fan of the performer, or watch a few youtube clips before attending.

However, for this rare occasion, I had heard good things, and decided to go in with no expectations.    I will say, it really enhanced the experience in my opinion. (It might even be something I try more frequently in the future.) I thought Rodes was hysterical.

Given the fact that the show was a special engagement, it seemed the headliner’s set seemed to last a little bit longer than usual, which gave time for a fun Q&A with couples in the audience – but more on that later.

After the local openers, this sweet little blonde girl took the stage. Sweet was my adjective of choice before seeing her set. Soft would have been how I described her voice. But hot damn, Erica Rodes is one dark girl. This being in the best way imaginable of course. She began her set touching on some light family material, what people expected out of her, and just a tad bit on how the pandemic has effected her current life.

However, it wasn’t long before we got into some of the darker more humorous bits of Rodes set. In a stomach-clenching-fall-out-of-your-seat from laughter bit, Rodes revisits the passing of her father. While vividly describing his decline from MS, Rodes points out the irony in all the walks for MS she did during her father’s life – which she comedically points out seems unfair and cruel. But in her words, when she “has an idea, she really runs with it.”

However, her father “is just gonna have to roll with it.”    Discussing some of the darker but funnier moments that precede us in death, Erica also covered dating in her thirties, the ever-present looming of death being right around the corner, and of course navigating dating apps both pre and post pandemic. And for those audience members wondering, the pendant-like charm around her neck is made out of her father’s ashes (well, what didn’t fall out after all this time,) not a rape whistle. But, it protects her just the same.

The laughs didn’t stop and just as such, I hoped the show wouldn’t. I haven’t laughed that hard in quite some time. It was really interesting when Rodes chose a few unlucky couples in the front row to converse with. It being valentine’s day, she had plenty of questions for the variety of couples that surrounded the stage. For one married couple, it almost seemed the audience as well as Rodes were all questioning them as their daughter had recently found herself in a bit of trouble. Still after the show, we were all left wondering what it was….too bad they decided not to share. Rodes even recapped her own instability in the world of dating and navigating dating apps, including a frequent match with a guy on Hinge. While she never met up with the guy for a date, she sure did let him know he made it into one of her jokes.

Erica Rodes is a relevant and extremely talented comic, especially considering her interaction with her audience given that improv is no easy feat. While I went into the show not knowing what to expect, I sure did leave a fan. It was refreshing to see this small blonde girl start busting out jokes about death and dying and heavy subject manner all while never seeming to lose her likeable charm. While this show was a one and done, keep an eye on the calendar for Helium Comedy Club for her return, as I can promise you it’ll be a show you won’t want to miss.