‘Cloudy With a Chance of Meatballs 2’ opens September 27! Enter to Win Passes to the Advance Screening!

Enter to win a family 4-pack of passes! 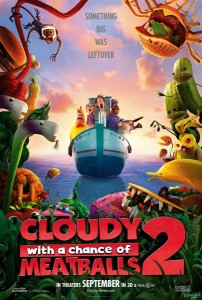 “Cloudy with a Chance of Meatballs 2” picks up where Sony Pictures Animation’s mouth-watering comedy left off. Inventor Flint Lockwood thought he saved the world when he destroyed his most infamous invention — a machine that turned water into food causing cheeseburger rain and spaghetti tornadoes. But Flint soon learns that his invention survived and is now creating food-animals – “foodimals!” Flint and his friends embark on a dangerously delicious mission to battle hungry tacodiles, shrimpanzees, hippotatomuses, cheespiders and other foodimals to save the world – again!

Cloudy With a Chance of Meatballs 2 opens Friday, September 27!

Screening will take place Saturday, September 21 at Weherenberg Ronnies 20 (10am).