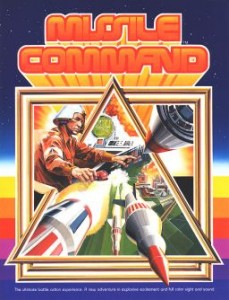 I need to start a section on this site called, “Bad Ideas From Hollywood”. There is enough stuff announced each week that makes absolutely no sense that it could actually be one of the biggest things on the site. (Such as an erector set movie, or a movie based on Battleship, etc.)  The latest bad idea? Making the Atari videogame Missile Command into a film.

Apparently Atari is in talks with numerous studios to adapt their classic videogame into a movie. The studio who is the frontrunner? Apparently FOX is willing to take a gamble on the game turned film.

The original game didn’t have an overly complex plot. The manual described the game as a conflict between two planets; The Krytol and the Zardon. There really isn’t much more to the game other than defending Zardon from attack by shooting “missiles” out of the sky.

I am wondering why anyone is bothering trying to secure rights to this? It isn’t like Missile Command is a big enough property to gain any publicity for having the money. It doesn’t have an in depth story or a major plot point that couldn’t be done in any other type of science fiction film. It seems that studios are vying for the chance to waste the most amount of money. If there ends up being an awesome movie named Missile Command in a few years, feel free to call me out on my words, but I’m almost positive there won’t be.