“Clash of the Titans” Featurette 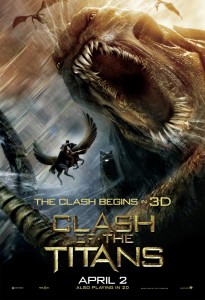 I’ve mentioned it before, but I think that it is funny that within a month of each other there will be two films based in Greek mythological characters, both starring a hero named Perseus. I’ve now seen Percy Jackson, and it wasn’t great, but it was worth watching. I’m hoping that Clash of the Titans will be an even bigger spectacle, and that the 3D won’t be a big disappointment. I’m a little bit worried that they tacked on the 3D at the end. It wasn’t a film that was shot for 3D, but when they saw how much Avatar made they quickly changed it to a 3D release.

Regardless, the monsters look cool, and I really like the cast. Ralph Fiennes as Hades seems an interesting choice, and it doesn’t look like he is giving us Voldermort 2.0. Liam Neeson continues to try to out god Morgan Freeman, and I’m willing to be they are going to have to have a god battle royale before long.