After a less-than-stellar 2013 campaign and post-season, the Cardinals have sent David Freese to keep Albert Pujols company in Anaheim. In addition, they’re sending reliever Fernando Salas, who played a vital part in the Cardinals’ s011 championship season but has been used sparingly the last two years. 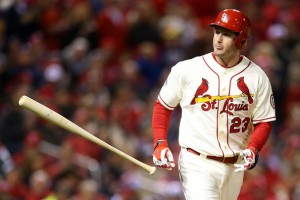 If there was ever a faster turnaround from hero to goat, I don’t think I’ve seen it in Freese’s case. After setting the post-season record for RBI (21) in 2011, Freese was an All-Star in 2012, a finalist for the Gold Glove at third base, and posted a healthy OPS of .839 while hitting 20 home runs. This last season, Freese initially struggled with a back issue in April, and it seems he never really recovered. His OPS was a career low .721, and in the playoffs he hit just .178 with four RBI, all of them in the NLDS. Cardinals fans took the opportunity to rip Freese’s game apart and clamored for a trade. Freese is cost-controlled for the next two seasons, a plus for the Angels. On the downside, he’s also going to be 31 in April and thus, is at the end of most players’ statistical peaks for his career.

Salas, too, had a terrific 2011, leading the team in saves (24) until he faltered in the latter half of the season, paving the way for Jason Motte to take over. He’s been much less effective the last two seasons, posting a 4.36 ERA, and with all the flamethrowers arriving in the bullpen, his departure was a foregone conclusion.

On the other hand, the Cardinals are getting some pretty serious young talent.

Who is Peter Bourjos? Well, he’s certainly not the second coming of Jim Edmonds at the plate. Bourjos is a career .251 hitter, but he’s hit above .270 twice. He did hit 12 home runs in 2011, and statistically speaking he’s just entering his physical prime. He stole 22 bases in 2011, and he’s stolen 50 in the minors before. He’s not a great on-base guy, so he’ll likely project to hitting second, if Matheny doesn’t move him to the bottom third of the lineup. 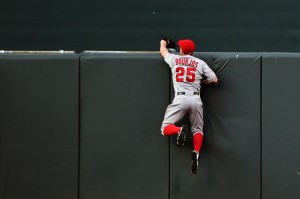 What I’m excited to see is his defense. Bourjos has tremendous speed and range, and his arm is also above average (10 assists in 2010, 7 in 2011). He’s robbed multiple home runs over the years (check out this highway robbery of David Murphy in 2011, or this snag robbing JJ Hardy this past season), and he has tremendous range. ESPN did a post two years ago displaying his range compared to an average center fielder, and it’s pretty impressive. With Jon Jay struggling in center this past season, it appears he’ll be the odd man out, as unless the Cardinals trade Matt Adams, they’ll likely move Allen Craig to right and have Bourjos in center, assuming Oscar Taveras doesn’t start the season on the big league roster.

All in all, this could be a pretty big win for the Cardinals. Bourjos is a starting-caliber center fielder and provides depth if Craig needs a breather in right or Taveras proves to be not ready in center. Freese and Salas both played a tremendous role in bringing the 11th World Series title to St. Louis, but this wasn’t an entirely unexpected move.