Just as quickly as a team can get hot, the tables can turn that quickly against them.

Just after the Cardinals put together their finest series of the season against the D-Backs, they came home and got steamrolled by the Atlanta Braves. The offense wasn’t terrible (although their runs per game average did drop a little), but their starting pitching went through their first rough spot of the season.

This man is on fire. Not literally. That’d be awkward.

Furcal’s on a 12-game hitting streak, and in his last five games alone, he’s gone 14 for 21. Absurd. Furcal’s average is now at .383, good enough for second in the league. Some questioned the off-season re-signing of Furcal, citing his recent history of injuries, but Furcal has been healthy and played excellent defense to go with his torrid offense.

Just as en fuego has been Beltran, who’s been alternating between the second and fourth spot in the lineup. Beltran cooled off a bit in the final two games of the series against Atlanta, but this past week he has been sitting dead red on the ball. In his last eight games, Beltran has gone 12 for 34 with…wait for it…6 home runs and 14 RBI. In the absence of Berkman, Beltran has paced the team and demonstrated why Cardinals fans hated to see him step up to the plate against the team in the past. Nobody can rightly expect him to keep up this pace, but with this outburst, it’s not unreasonable to expect him to reach 30 HR and 110 RBI if he stays healthy. 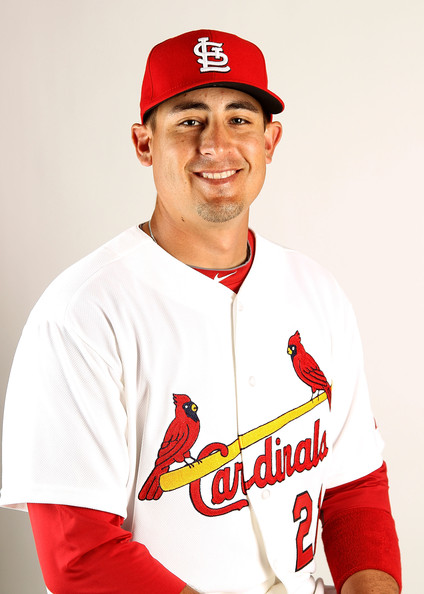 Since coming off the disabled list, Craig has done nothing but hit. In his ten games since he’s returned, he’s slashed .359/.413/.821 and hit ten bombs and driven in 16. Craig is one of the best power-hitting prospects the Cardinals have developed in the last decade, averaging a home run every 17.65 at bats (for comparison’s sake, Albert Pujols averaged one every 14.18 at-bat when in St. Louis). Before the knee injury, Craig had the inside track to being the third starter in the outfield. Now that he’s back, Matheny’s got a good problem on his hands: juggling Craig, Holliday, Beltran, and Berkman in three positions.

Well, that should come with a caveat. The starting pitching in Arizona was pretty solid, and Lance Lynn wasn’t terrible today, but Jaime Garcia and Adam Wainwright struggled pretty heavily against the Braves. Garcia surrendered nine hits and couldn’t make it out of the sixth inning; fortunately for him, the offense picked up and got him out of the decision.

Wainwright, on the other hand, was somewhat a victim of bad luck in the first inning yesterday. He gave up two grounders that were pretty softly hit but in the perfect spots; after that he couldn’t recover and walked three before he got out of it. Typically a fairly accurate pitcher, he gave up five walks yesterday, the first time this season he’s surrendered more than two. Lynn again struggled a bit with his command and needed 121 pitches to last six innings. He did strike out seven batters, but he walked four, and Jason Heyward made him pay with a bases-clearing double.

Not really a meh, but a sidenote. Lance Berkman was activated from the 15-day disabled list today, prompting Matheny to send down Shane Robinson.

Robinson was the fourth outfielder at the beginning of the season, but the return of Skip Schumaker and Allen Craig pretty much made his spot redundant. He has a pretty decent slashline (.311/.354/.422), but his playing time had been significantly reduced in recent weeks, and he’d gone 1 for 15 since April 26.

Still, some could argue that he merited a stay on the bench more than Tyler Greene (1 for his last 17) and Daniel Descalso (4 for his last 16), but their versatility (both can play second base, third base, and shortstop) plus Greene’s lack of options made Robinson the odd man out. Some thought was also given to Matt Carpenter, who plays first and third, but he provides a potent left-handed bat off the bench (his 17 RBI is fourth on the team).

Still, should one of the outfielders end up on the disabled list, Robinson could be one of the first numbers called up.

The Cardinals host the Cubs for a quick two-game series before heading to the West coast. They take on the Giants Wednesday and Thursday before heading to LA for a showdown with the Dodgers, who boast the best record in baseball right now.

Congratulations to Tony La Russa, whose number 10 was retired Friday. Tony finished his stint with the Cardinals with 1,408 career victories with the team, two World Series titles, three pennants, and nine playoff appearances in 16 years. Should this be the end for Tony’s managing career, he’ll finish third all-time in managerial wins behind Connie Mack (who almost certainly never would have achieved his record had he not also owned the team) and John McGraw.

Tony was one of the most polemical figures in town the last decade or so, and I’m not entirely certain it was merited. He certainly made some head-scratching decisions at times, moves that in hindsight were worthy of second-guessing, but he also lived and breathed the game of baseball while he was managing for the Cardinals. He made a lot of moves, both tactical and strategic, that have gone largely unappreciated in this town. Still one of my favorites was last year against the Giants with a tie game in the bottom of the 11th. With a runner on third and no outs, Tony called in Allen Craig, who was playing left, to man the third base line, leaving just two outfielders. The move paid off as two batters later, Aaron Rowand hit a shot down the line that Craig snared and got Torres in a fielder’s choice, saving the game (though the Cardinals would eventually lose in 12).

Love him or hate him, the man helped lead the Cardinals to two World Series titles, and for that I’ll be forever grateful. We’ll get to see him manage one last time in a Cardinals uniform at the All-Star game, and I look forward to it.