Well, another weekend’s come and passed, and another Cardinals series win. This habit of winning two out of three isn’t all that bad. I’ll share a few thoughts, as that’s what I get paid to…wait, I don’t get paid. But I’m going to share my thoughts anyway.

– Props to Adam “Bulldog” Wainwright for managing to go the distance last night, giving the bullpen a much-needed night off. Other than a second inning aberration when he allowed three runs, two earned, and three hits, he was pretty phenomenal, surrendering just one more hit the rest of the way.

Interestingly, the Cardinals didn’t make any moves to promote any pitchers for last night’s game. Had Wainwright gotten in serious trouble or injured, rumor has it the batboy would have gone in. 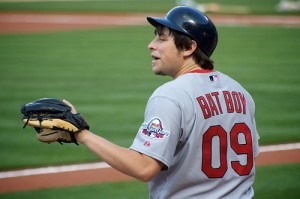 – Ryan Ludwick looks pretty comfortable in the second spot. After starting the season hitting .143, he’s rebounded to hit .440 in the last six games with a .533 OBP. He also hit the game-winning bomb last night, his first of the season. Tony’s always preferred to have some pop in the second spot, and Ludwick seems to have adjusted well.

– Hopefully Matt Holliday, Brendan Ryan, and Colby Rasmus are breaking out of their little slumps. Holliday rebounded from a battle with the flu to go 3 for 3 last night, and Rasmus hit the game-tying homer for his first hit in 16 at bats. Ryan had two hits last night to bring his average near the Mendoza line after starting 2 for 29 (yikes).

– The Cardinals starting rotation is absolutely on a tear right now. In 12 starts, the starters are 7-1 with a 2.09 ERA. Brad Penny takes the mound tonight at Arizona. 14 innings pitched, 2 earned runs so far in two starts.

– I’m really hoping Bryan Anderson gets the chance to start a game this week. He had one pinch hit appearance this weekend, grounding into a forceout that Ludwick managed to turn into a double play, and Yadier’s legs are probably barking for a breather, having caught 38 innings in three days.

– Random overheard question at the Cardinals game Saturday: “Does baseball have a halftime?” Yes, this was really a question.

That’s pretty much it for now. The Cards sit a game ahead of Pittsburgh (really?), with the rest of the Central at least three games back.

One non-Cardinals note: I’m sure most of you by now have heard about the incident in Philadelphia, where one drunk fan intentionally vomited on a man and his young daughter at the game last week. Well, happily, the Phillies are providing free tickets and dinner to the family as compensation. Read the story here: http://www.mcall.com/news/local/all-a1_5vomit.7243756apr19,0,6175303.story