Cardinals Pull Within One Game of Pittsburgh

Well hey, don’t look now, but the Cardinals actually managed to play some solid ball this past week.

Yes, I know, earlier this season, 4-2 would be par for the course, perhaps even mediocre, but with the post-season woes the team’s gone through, a 4-2 week is a welcome respite, especially coming against Pittsburgh and Chicago.

Combined with Pittsburgh’s recent slide (2-7 in its last nine games), the Cardinals have managed to cut their deficit in the NL standings to just one game. Adam Wainwright was dominant yesterday, Joe Kelly was effective Saturday (as he has been in every start since moving to the rotation), and the Cardinals finally earned a couple of comeback victories, beating Pittsburgh in 14 and 12 innings, respectively.

One would be hard-pressed to pinpoint a singular reason for the resurgence. Obviously Yadier Molina’s return on Thursday provided a bit of a morale boost as well as the return of the best overall catcher in baseball. Yadi had four hits this weekend, all of them for extra bases, and guided a pitching staff that allowed just one earned run in two games.

Matt Holliday, too, has been on a tear. Since July 29, he’s slashed .367/.451/.494 and driven in 14 runs, including the walk-off hit last Thursday. It would appear that rumors of his demise were greatly exaggerated. 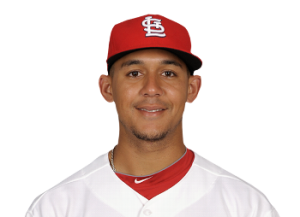 So too, were the reports that Jon Jay was finished. For most of the season, his average has been on the wrong side of .250, and his on-base was closer to .300 than it was to .355, his career average. When the calendar flipped to August, though, something just clicked and he’s easily been the team MVP this month. Since August 1, he’s slashed .377/.421/.536 and driven in 15 runs in 17 games.

Jay’s taken a lot of heat for his season thus far, and some of it’s justified. A career .300/.359/.414 hitter before this season, he has lagged well below those averages so far, and his defense has also been below his norm. Fans have been clamoring for his release/trade for much of this summer.

Still, with the uncertainty surrounding Oscar Taveras’ inevitable call-up to the majors as well as Carlos Beltran’s pending decision in the off-season, Jay remains the Cardinals’ most viable option in center field, as there aren’t too many options at Memphis right now.

Maybe eating all that Imo’s took away from his time in the cages. Who knows. Whatever the reason is, David Freese simply hasn’t hit as well as Cardinals fans have come to expect. After posting a career .809 OPS through his first four seasons, Freese has struggled to manage just .724 this year. His slugging is way down (six home runs this year, 20 last year; for his career, he averages 18 every 162 games). He started August off strong (.382/.475/.618) through the first ten games, but he’s managed just one hit in 16 at-bats since.

In a move intended to give Freese some rest and time to work on his issues, the Cardinals made the unexpected move of shifting Matt Carpenter from second (where he earned a spot on the All-Star roster) over to third and promoted their top second-base prospect, Kolten Wong.

I wrote about Wong earlier this week, so I won’t re-hash it all. Wong appeared in all three games this weekend and started twice. He’s still without a hit, but he crushed a fly ball to center field yesterday that would have had a chance to get out were it not for the famous Wrigley Wind; another pitch he ripped opposite field – right to the third baseman. He’s making solid contact, and his defense has been solid so far. While others may wonder whether Carpenter can adjust to third, well he’s been a third baseman his entire collegiate/minor league career, so I think he’ll be fine.

On the same note, some are wondering why Wong can’t simply move over to shortstop, where there’s been a much greater need for some offense. It’s possibly a move that could be discussed in the off-season, but given Wong has played exclusively at second base in his career with the Cardinals, it likely wouldn’t be something they’d consider this season. While there are similarities between second and short, there are also some big differences, such as range, arm strength, and footwork which would require more than just a few infield practices to master. Shortstop likely will be the team’s highest priority this off-season, but until then, it’s likely the team will continue to rely on Kozma and Descalso, at least until the rosters expand and the Cardinals can bring up Ryan Jackson, who’s managed a respectable .284/.358/.358 line at Memphis.

It would appear that the rookie hazing has begun.

Rick Hummel of the Post-Dispatch reported that Chris Carpenter bought stewardess outfits for some of the rookies to wear on the bus trip from Chicago to Milwaukee. There were no pictures linked, but you can pretty much use your imagination.

Yes, it’s technically considered hazing, I guess, but it’s been a part of the game for so long, people have just gotten used to it. It’s all in good fun, and while not every team does it, enough do that it’s not considered unusual. The Cardinals didn’t do it for a while under Tony LaRussa, but when they finally convinced him to let them in 2011, the results were, well… 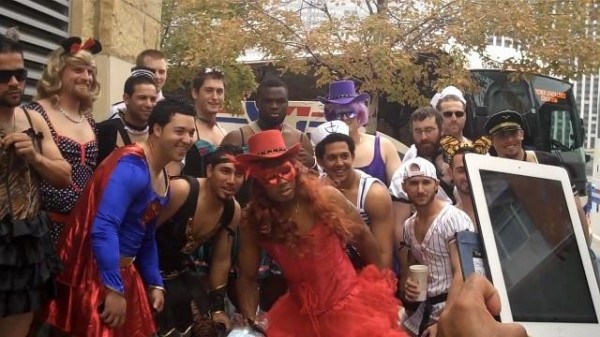 Remember this the next time you watch a game.