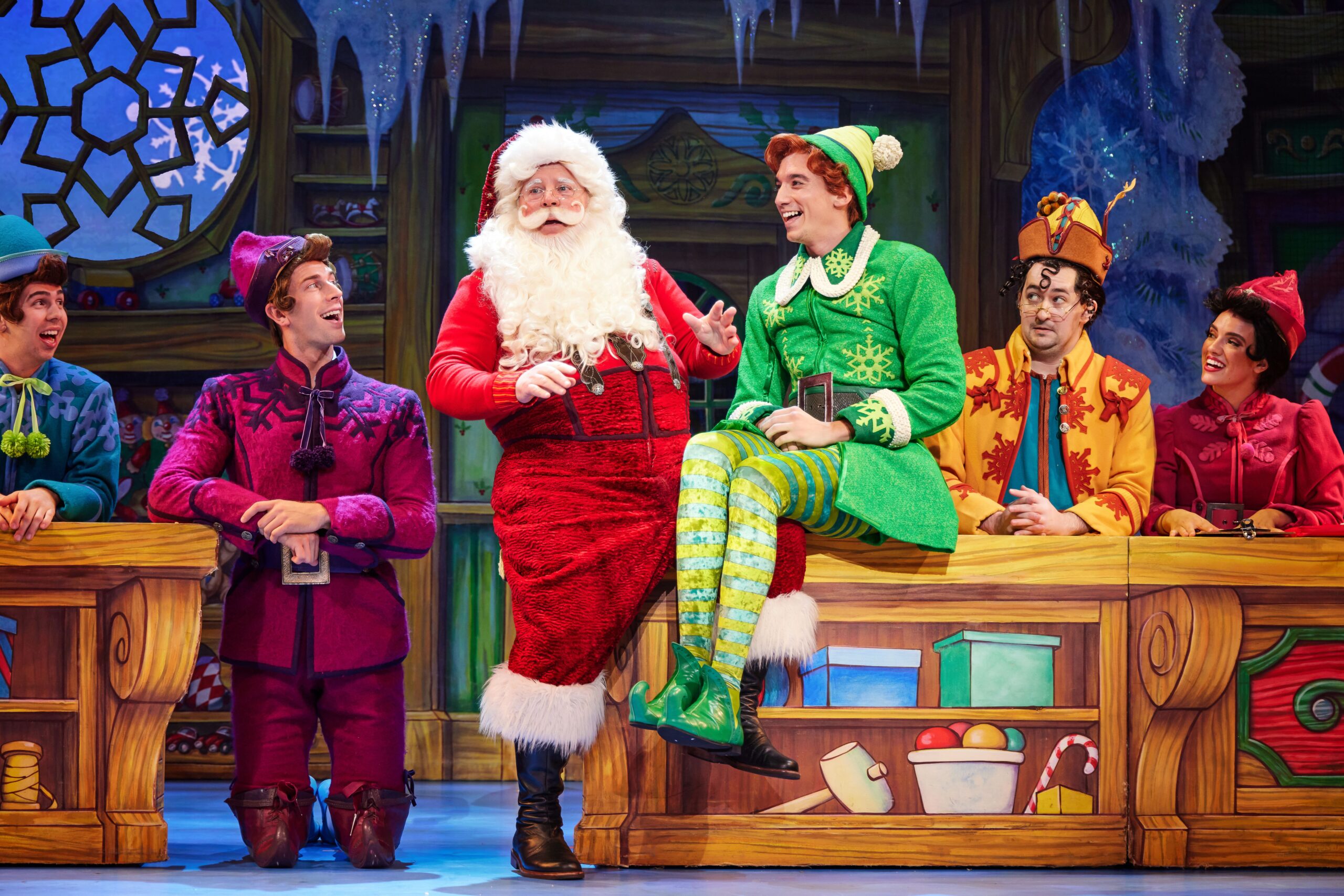 Fans of Jon Favreau’s 2003 film ELF starring Will Ferrell are sure to enjoy this musical adaptation, playing The Fabulous Fox Theatre just in time for the holidays.

The story follows the same beats as the film – Buddy (Cody Garcia) is raised at the North Pole by Santa (Mark Fishback) and his elves until he discovers he is actually human. He heads to New York to find his father, Walter Hobbs (Christopher Robert Smith) – a businessman working in the high-pressure world of book publishing – and makes several new friends along the way. Along with Walter’s wife, Emily (Caitlin Lester-Sams), and son, Michael (Jaxon James), Buddy meets Jovie (Tieisha Thomas) at the department store he accidentally finds himself employed at – with a confused Manager (Jerquintez Alonzo Gipson) who mistakes him as someone from corporate.

Garcia does a wonderful job capturing the spirit of Buddy, who fans of the film will know has an endless amount of joy and energy. As they run around the stage singing and dancing, you would be hard-pressed to find anyone in the audience without a smile. Their singing voice, matched with charisma and charm, makes for a fun portrayal of the lovable character.

Speaking of singing voices, Tiesha Thomas brings the house down with her powerful and impressive vocals. The actor has a firm grasp of the balance between the dramatic and comedic portrayal of the character, and wows with numbers like “Never Fall In Love (With An Elf)” and “A Christmas Song” where Jovie gets into the spirit of the holiday alongside Buddy.

Smith does a fine job as the typical businessman who is too busy to realize he is ignoring his family. Jaxon James sounds great during his songs, and is always believable as the young man who just wants to spend Christmas with his father. Meanwhile, Lester-Sams adds equal parts to both the humor and sincerity of the family dynamic.

Audiences have seen all sorts of Santas over the years, across all types of media. Here, Fishback does a terrific job giving us a lovable and hilarious Santa. The actor plays the jolly gift-giver with a down-to-earth approach that makes each line funnier than the next. He acts as a narrator, reading the story of Buddy the Elf to the audience (much like Bob Newhart does in the film as Papa Elf), which is a fun change and works well in the show.

The sets are bright and colorful, transporting the audience to the North Pole and Santa’s Workshop – filled with fun toys, talking animals, and dancing Elves. Equally impressive are the New York sets, with the Empire State Building, Central Park, and the department store. The sets make smooth transitions as we travel around in the story.

While all but a few of the songs are a bit forgettable, most of them are cute and do a fine job of telling this entertaining story. The show lives or dies upon the portrayal of Buddy (and it’s not easy to capture the spirit of Will Farrell’s iconic performance in the movie), and Garcia does a great job. If you enjoy the movie, there is a lot of fun to be had with this cheerful adaptation for the entire family.