Brandon Phillips Wants to Play Cardinals With One Leg, Can’t Win With Two

Pretty much every part of the Sea of Red here in St. Louis has heard about the inflammatory comments Brandon Phillips made regarding the Cardinals. If you didn’t read them, here they are, in all their inane glory: 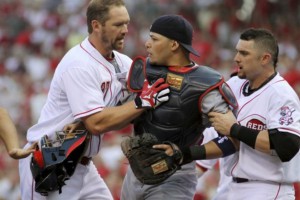 Obviously, these comments didn’t go over well with Cardinals fans, and the Cardinals themselves took notice last night. After Phillips tapped Yadier Molina‘s shinguards with his bat, a custom he does on occasion, Molina took exception. Words were exchanged, shoves were thrown, and Johnny Cueto thrashed his legs into the crowd like Quint trying to escape from Jaws. Jason LaRue, who took the brunt of Cueto’s karate demonstration, suffered a concussion and a cut that required four stitches.

Click here to watch the video of the bench clearing brawl.

As I write this, the game is in the middle of a rain delay in the top of the 8th, with the Cardinals leading 6-0. Already assured of winning the series, they’re [hopefully] heading toward the sweep and sole possession of first place.

Good job of the Reds displaying their class and professionalism this series. Hopefully Cueto receives a lengthy suspension. As for Phillips…words fail me. After this series, he might have to downgrade to a youth-sized jockstrap. He managed to go a winner-like 2 for 14 in the series; he did, however, have several nice foul balls. I’m sure he was trying to motivate his team, but the manner in which he did it is akin to poking a bulldog with a stick. Win the division and then perhaps you have the right to talk trash. But not when we’ve dominated the Central the past decade and have gone 9-5 thus far against you this summer.

Perhaps this is what the Cardinals need to finish the season strong. Certainly the fight brought a lot of attention to the rivalry, but the best way for the Birds to fight back would be to completely dominate and give Phillips a nice serving of STFU. So far since the comments were made, the Cardinals have roared to life, outscoring the Reds 21-7.

Several Cardinals have been hot.

– In his last six games, not counting today, Matt Holliday has gone 11 for 26 with a home run and 8 RBI.

– In his last five games, not counting today, Molina has gone 1o for 20 with a home run and 4 RBI.