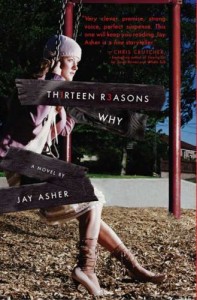 Th1rteen R3asons Why was written by Jay Asher. It has won many young adult awards from 2008-2010. As of February 2011, Universal Studios picked up the rights of the book to turn it into a movie. However, no date of release has been set yet. Selena Gomez has been asked to play main character, Hannah Baker.

It is a very touching novel about a girl who commits suicide and the 13 situations that put her on that path in one way or another. Hannah Baker was just a normal high school girl. She moved to a new town and was nervous about making friends. Her guidance counselor introduces her to another new girl, and Hannah thinks they may become good friends.

Over the course of the next year, Hannah learns that people are not always what they seem. She is placed in situations that make her feel like her life is out of control and no one is on her side. She starts to get depressed and decides the only way to feel free is to leave this life all together. But, she can’t leave until she has left a message for others explaining why she did what she did and what part they played. To do this, Hannah records messages on seven cassette tapes, each side representing a person.

Clay Jensen receives a package containing a shoebox filled with these seven tapes. He has no idea who they are from or what is on the tapes. After finding a means to listen to them, he realizes the voice he hears is Hannah and she has a message. Hannah explains on the tapes that each person must listen to them in its entirety then mail the tapes to the next person on the list. If this is not followed, a second set of tapes will be released to everyone with the same stories that some may not want to get out.

Th1rteen R3asons Why follows Clay on his journey listening to these tapes. His actions and responses are heart-wrenching because he had a crush on Hannah and knew something was wrong with her, but did not know how to help.  I was completely drawn into this story and found myself spending many hours reading it before my eyes were too tired to continue. I kept a box of tissues next to me and used it often. I think this story touches on a lot of things that every single person has experienced in high school. I recognized many a person in each of the characters…even a few that remind me of Hannah.

While I think anyone can enjoy this book, I would recommend it to those who have, at one time, been depressed or knew someone who was depressed, especially if it was as a teenager.  This book can help many who think they are alone and have no one to turn to. It lets you know that others go through what you are going through and maybe this can help. It may be fiction, but each experience and emotion feels real.

Th1rteen R3asons Why gets an A+!