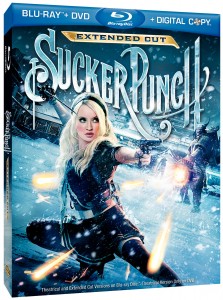 A girl (Emily Browning) accidentally kills her sister while trying to off her abusive, molesting step-father, and gets thrown in the nut house. With less than a week to go before is to receive a lobotomy, her and several other female inmates plan an escape while embarking on a hell of a ride through their fantasy world.

Let me first clarify that I am a big Zack Snyder fan. I absolutely loved his DAWN OF THE DEAD remake, I thought 300 was a breath of fresh air, and as a massive fan of the graphic novel, he met all of my expectations for WATCHMEN. Here, however, I think he missed the mark by a bit. There is no doubt in my mind that this movie will be one of the more polarizing features of 2011. So let’s start with the good.

The movie looks unbelievable. I don’t think there is a person alive that would accuse Snyder of making an ugly looking movie. Visually, I would say he has even one-upped himself here from his previous films. If you’ve been aimlessly wandering through life disappointed because you have yet to find a movie that has supernatural samurai, dragons, and Nazi zombies, then you sure are in for a treat. Throw in a mix of sword play, gun fights, and gorgeous women of the scantily clad variety, and you have yourself SUCKER PUNCH. Baby Doll (Emily Browning), Sweet Pea (Abbie Cornish), and Rocket (Jena Malone) are the real standouts here.  These women are going to have a bright future in Hollywood. Malone especially, who always impresses me with her work.

On paper the movie looks good. In practice is an entirely different story. The core issue I have here is it feels like there are pieces of the film missing. I could see Snyder was going for something here but he has either really missed the mark or the studio butchered this in post-production.  Another issue I have is the fantasy world within a fantasy world angle he took. Knowing that fact from the get-go really dampens how much I am able to care about these characters and no matter how good of a job the girls did, at the end of the day I simply don’t care about them. The over the top acting of Oscar Isaac and ridiculous accent from Carla Gugino wore thin very quickly. I would comment on Jon Hamm’s performance but he is barely in the flick. If you blink you’ll miss him.

Picture: 2.40:1 in 1080p HD with AVC encoding. The visuals are the bread and butter of this movie. They are exactly what you’d expect from a Zack Snyder film and they translate to Blu Ray incredibly well. This is a visual feast and the transfer here is no let down.

Sound: DTS-HD Master Audio 5.1. The sound is almost as equally impressive as the visuals. Snyder has quite the eye and ear for the aesthetics of his movies and never lets us down where it counts. Staying true to form, the audio is going to blow you away.

If you’re looking to shut your brain off and watch beautiful people in a gorgeous movie engaging in acts of cartoonish, fantasy violence then grab some popcorn because this will certainly satiate your appetite. If a lack of true character development and a Swiss cheese plot are enough to derail your fun then you might want to steer clear. SUCKER PUNCH is truly a testament to how good a movie can look so for the eye candy alone I’d say this is worth a rental.