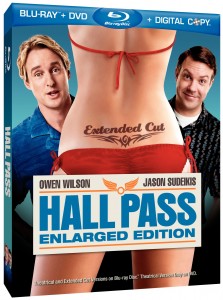 In order to make their husbands appreciate them more and to strengthen their marriage, two wives allow their husbands a week off of marriage to do whatever two sex craving middle aged guys will do. It makes perfect sense, right?

Growing up I had a very fond affection for previous Farrelly brother’s efforts. DUMB & DUMBER, THERE’S SOMETHING ABOUT MARY, and KINGPIN are still near the top of the list of the funniest movies I saw while growing up. The Farrelly brothers pinned the market on combining gross out humor with a heart well before Judd Apatow took the reins. At the time, they were masters of balancing those far ends of the spectrum. But then something happened. I am not entirely sure why but they lost it. Over the next 13 years following THERE’S SOMETHING ABOUT MARY, we would see glimpses of their old selves in their films only to quickly recess back into mediocrity and flat characters. All we are left with now are the abysmal efforts of OSMOSIS JONES, SHALLOW HAL, STUCK ON YOU, and FEVER PITCH. Now we can add HALL PASS to that list.

The husbands, played by Owen Wilson and Jason Sudeikis, really feel like they were tied down here. Owen Wilson is without his usual witty charm. Instead he comes across like a fumbling forty-something on an aging-frat-boy autopilot. Jason Sudeikis isn’t much better here either. I thoroughly enjoy his work on SNL but he just falls flat. Jenna Fischer and Christina Applegate play the wives and for as much talent as those ladies have they could have been given more to work with. Their roles could have been played by tree stumps and it wouldn’t have made a lick of difference here. Not even Richard Jenkins playing Coakley, the rich, single playboy and friend of the husbands can save this show. A lot more could have been done with his character but like the rest of the cast he gets the shaft as well. This is a cast is teeming with talent but all of them fall victim to a dull screenplay and dull characters.

Is a comedy without laughs even a comedy at all? That’s a question I was asking myself throughout HALL PASS. It’s a sad state of affairs when I can count on one hand the amount of times I laugh during a comedy. In this case it only took me one finger.  That one laugh is thanks to the terribly underused Stephan Merchant. Even then I had to wait until the very end of the movie.

Picture: 2.40:1. There is nothing to write home about here. This could have been a DVD and I wouldn’t have noticed a difference.

Sound: DTS-HD Master Audio 5.1. The sound is equally as lackluster as the visuals are.

The short and not so sweet: No, no it is not. The jokes don’t work, the characters are bland, talent is put to waste here, and it simply falls short on everything it tries to accomplish. It isn’t dreadful but it is completely forgettable and even worse, not funny. I cannot recommend this. Not even as a Sunday afternoon “I Am Too Hungover To Change The Channel” movie.