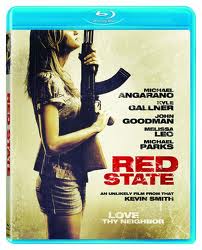 Kevin Smith is perhaps one of the most frustrating filmmakers of this generation. His best movies are amazing, Clerks, Chasing Amy and Dogma are part of our cultural Zeitgeist and yet for every Clerks, he has given us a Clerks 2, a Jay and Silent Bob Strike Back or a Jersey Girl. Oddly enough, Red State falls somewhere in the middle.

Like many of his other films, Red State ultimately lacks focus. Kevin Smith has publicly stated that he intended Red State to be a “horror” film, not a thriller or suspense movie, but a good old fashioned horror flick. While there are several scenes that achieve moments of horror, the film as a whole elicits more of a hostage movie feel.

But that’s not what kept me from enjoying this movie. Regardless of the genre, Red State spends far too much time preaching for the viewer to become engaged in the story. Above creating a horror movie, it seems like Kevin Smith really just wanted to demonize fundamental Christian extremists – an argument that doesn’t take much convincing. The time he spent hitting the viewer over the head with the idea that “these guys are bad”, he could have been enriching the characters of the protagonists. As it stands, the protagonists are so flat that there’s little to connect to.

Instead of rooting for good guys, we’re rooting against the bad guys.

Even as messy as the overall story is, there are elements of this film that are wonderful. The acting is nothing short of mesmerizing; the editing of action sequences is superb and the setting of the Christian compound is frighteningly authentic. Kevin Smith even scores points for ambition. This is a film that he personally financed and is also possibly his first movie with subtext. While the subtext is still more overt than most, it has some insight into the dichotomy between faith in religion vs. faith in government.

Red State is not perfect, but it is fairly original. In a time where everyone relies on shock value, Red State actually has genuinely shocking moments. I don’t see die-hard Christians loving this film, but if you have malleable religious beliefs or at least possess the ability to seperate fiction from reality, you may not hate it.