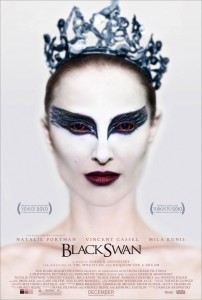 Director Darren Aronofsky brings us his first film since his Academy Award nominated picture “The Wrestler.” Reminiscent of his earlier work like “Requiem For a Dream,” “Black Swan” is a return to the dark, psychologically stimulating tones that we know and love.

Natalie Portman stars as Nina, a troubled young dancer who has dedicated her life to perfection and ballet. As a dancer in the New York City Ballet, she knows that her goals will only be achieved with endless practicing and perseverance. When the role of the Swan Queen in the upcoming production of “Swan Lake” becomes available, Nina wants nothing more than to achieve the role of her life. But when rival dancer Lily, played by Mila Kunis, comes into the mix – things start to get a little more complicated. Lily’s nonchalant attitude is mysterious to Nina, and makes the competition that much harder to read. When pressures at home with her obsessive mother (Barbara Hershey) start to build up, along with vivid hallucinations that are unmistakably real, Nina starts to break down during the most important time of her career.

“Black Swan” is an eye opening film for those who know little about ballet. Beside from the captivating story that revolves around the main characters, it shows just how stressful life can be for a professional dancer. Arnofsky brilliantly captures the stress and anxiety that goes along with the lifestyle, and presents it in a way that takes the audience along for the ride. It is an emotional story, that is beautifully captured on film in a unique way that the director is familiar with. Aronofsky’s films have been a window into the lives of characters that many real people can relate to, but are often not focused on. “Requiem For a Dream” is a disturbing look into the way that drugs can affect the lives of perfectly normal people. The fact that the film captures something that is very real has that much more of an impact. The same goes for “The Wrestler,” as you watch Mickey Rourke try and pick up the pieces of his shattered life. “Black Swan” is no different, as you can truly feel the tension of Portman’s character.

Both Natalie Portman and Mila Kunis do an incredible job as the leads in the film. I think this truly may be Portman’s most impressive role to date. Just watching the emotions that her character has to go through is chilling, and the actress pulls off the role with a breathtaking performance. Beside from the acting, Portman’s dancing is most impressive. In preparing for the role, the rigorous dance routine helped her really get into the emotional mindset of the character. The final result really shows how dedicated the actress was for a year before filming, and is truly impressive to see what she could do in a year of training. Kunis is the perfect for the role, opposite of Portman on-screen, in an ambiguous role that keeps you guessing as to what her real motives are throughout the film. The film is the perfect for her to show that she is quite a talented actress, and given the opportunity can do an exquisite job in a more serious role. Also, credit must be given to Vincent Cassel as the artistic director of the ballet. He adds a creepy and almost sinister tone to the film, as his character’s motives are quite mysterious as well. Hats off to Barbara Hershey as Nina’s mother, who gave up a ballet career of her own to raise her daughter. She lives vicariously through Nina, as she struggles with problems of her own with letting go.

“Black Swan” is an incredibly well done psych-thriller, with the best director at the helm that I can think of for the job. With brilliantly acted performances from the entire cast, the film will have you on the edge of your seat in suspense. The score is great, as per the usual in Aronofsky’s films, and adds tremendously to the tension. The film is a unique insight into the psychological mindset of a troubled dancer, and will be sure to generate some worthy Oscar nominations.

Black Swan is an A.