Another Take By Zac: Film Review: The Chronicles of Narnia: The Voyage of the Dawn Treader 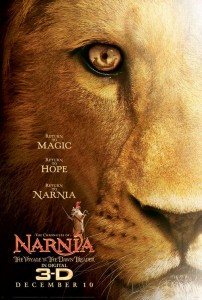 The new Narnia has left the mouse house and landed at Fox (and in 3D) and the results are a clumsy adventure that takes more than a couple steps back from the very good Prince Caspian.

Dropping the two older Pevensie siblings and replacing them with their annoying cousin (who’s name sounds like useless, which I couldn’t have agreed with more) was the first mistake by the film and as Lucy, Edmund, and Eustace transport to Narnia I knew this kid was going to make this a long trip.  The group hooks up with reigning ruler of Narnia, Prince Caspian, after he randomly comes across the Pevensie’s in the middle of the ocean they just transported to which they immediately take as a sign that trouble is brewing in Narnia.  Caspian is on the hunt for the Lost Swords of Narnia and the fate of his lands will become intertwined in this quest.

As the plot moves along the characters rarely discover anything about their quest and things just easily move forward as they are either given or quickly deduce their next step.  What this leads to is that the film has no suspense or stakes to figure things out and as they move from sword to sword things just feel like they are clumsily thrown together for ease of plot.  The exposition in the film is a bit overwhelming as well and somehow they lose so much of the ground they gained in the huge step forward the series took last time out.  The action isn’t anywhere near as good as the last film which had some amazing battles and sword fights.  The last film had a sense of peril and risk that this and the first film in the series lack and it severely levels out the potential for drama.  This latest entry also brings back a bit too much of the heavy handed undertones that C.S. Lewis put in the source novels.  Prince Caspian excelled partially because it didn’t worry about the Christian undertones and just went for a great story and again the film takes a step back here.  Caspian is also castrated here and is no where near the badass that he was in the previous film.  The script gives nobody anything to work with and while the actors are fine and all there is just no emotional punch to the picture.

The film does have some bright points though.  First, the 3D here is solid and a step in the right direction for the potential of post-production 3D.  This wasn’t shot in 3D and while it doesn’t have the depth and pop of something that is natively shot it is still by no means a distraction and looks quite fine.  Second, Reepicheep is back and is great as one of the stories leads as he was one of the best parts of the last film.  And fear not for those worried about the actor switch behind Reepicheep’s voice, Simon Pegg is just as great as Eddie Izzard was in Caspian.  The effects in the film are also quite solid and the production design is great as well, though it definitely feels like the budget has been scaled back a bit compared to the Disney produced ones.  I also enjoyed the way the film embraced the weirdness of this story as well and it is great to see them kind of let their freak flag fly on this one.

Georgie Henley and Skandar Keynes turn in solid work as the Pevensie siblings and both are capable of leading the film.  Sadly Ben Barnes is not given nearly enough screen time here as Caspian and even further disappointment is added in the aforementioned weakening of the character.  Will Poulter is affectively annoying as Eustace and while I pretty much hated the character it was not the fault of Poulter’s performance.  As I mentioned above, Pegg is great as Reepicheep and really brings a heart to the character as is needed in the characters role/importance to the picture.  I do wish they would have signed up a couple more familiar faces to sprinkle into the supporting cast, but oh well I guess. (They got Neeson and Swinton back for their bits at least.)

In the end, The Chronicles of Narnia: The Voyage of the Dawn Treader is a few steps back from Prince Caspian but still remains above the original film.  The film stumbles along with no consequence and throws in a bunch of throwaway characters for the sake of faking some sort of emotional catharsis in the end and it never really works.  The film feels decidedly less epic than the previous efforts but keeps enough wonder and fantasy to keep the film watchable beyond its flaws.  That said, if a fan of the series I am sure you will find something to enjoy but don’t feel like you have to do see this in 3D; and definitely don’t expect this film to be the best in the series.

The Chronicles of Narnia: The Voyage of the Dawn Treader is a C-