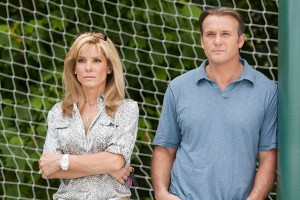 Sandra Bullock has won the 2010 Oscar for Best Actress!

Sandra Bullock has had somewhat of a banner year, two hot releases, and one blemish. Bullock started out her year red hot with her role in the romantic comedy, The Proposal, with Ryan Reynolds. The actress then followed with the resounding failure, All About Steve, co-starring with rising star Bradley Cooper. Although, Bullock’s biggest success of the year came in the form of sports drama, The Blind Side. The Blind Side is the film based around real life NFL player Michael Oher, and his uplifting story of finding a home after years of strife and homelessness. Bullock plays the maternal Leigh Anne Tuohy, who takes in Oher and treats him as one of the family.

Read our review of The Blind Side.

What do you think about Sandra Bullock winning Best Actress? Let us know to the comments!