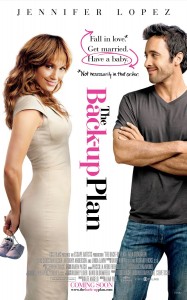 Jennifer Lopez stars as Zoe, owner of a successful upscale boutique pet store in the new film The Back-up Plan. While her professional life is flourishing, her personal life is floundering. You can only imagine how hard it must be for a woman who looks like Jennifer Lopez to meet that special someone. As the film opens, impatience has taken its toll; evidenced by the very first scene in which Zoe is on the business end of an artificial insemination. But, this being a romantic-comedy and all, she meets that special someone immediately upon exiting her doctor’s office. Stan (Alex O’Loughlin), who sells his handmade cheeses at the local farmers market, is the sort of man that only exists in the world of women’s wish-fulfillment fantasies: smart, sensitive and sexy. And let’s not forget willing to embark on a relationship pregnant with children that are not his own. His biggest fault is that he cares too much. Of course, all this is fine if done well. After all, does anyone actually believe that Seth Rogen’s character in Knocked Up­ would have a realistic shot at the likes of Katherine Heigl? But the key phrase here is “done well.”

The film is so formulaic that you could chart it on a graph. It hits all of the standard rom-com beats: the “meet cute,” the sassy best friend (Michaela Watkins), the faux obstacles preventing our leads from being together and the inevitable, last-minute, impassioned, apologetic plea for reconciliation. (Oh, um…spoiler alert. But, I mean…c’mon.) And, truth be told, it’s not that the film is bad, per se. It’s more a question of tone. The film is gentle to the point of bordering on lacksidasical. Lopez and O’Loughlin do a fine enough job I suppose, it’s just that they are given so little to do. The characters aren’t very well conceived and they seem to like each other for no real reason other than the fact that the plot requires it. There is very little spark on the page and these two certainly don’t bring any of their own. The film’s humor essentially boils down to “pregnant women puke, eat and cry.” And we are treated to the obligatory comically over-the-top birthing scene. In retrospect, I guess it’s fitting that Stan makes cheese.

There’s nothing even remotely based in reality for the film. Men agree to raise a stranger’s child on a second date, women let them and it all takes place in parallel universe where New York City is clean, pretty and crime free. And while lip service is paid to the extraordinary cost of raising children, it’s all wiped away with a single line of dialog when Zoe simply says, “I’ve got money saved.” Granted, it’s a welcome respite from the more manic films being passed off as rom-coms as of late (When in Rome, The Ugly Truth, Did You Hear About the Morgans?) but that is admittedly damning with faint praise. In the end, The Back-up Plan is an inoffensive, mildly amusing, trifle of a film. Don’t forget gentlemen, summer blockbuster season is just around the corner. If your wife or girlfriend is willing to sit through Iron Man 2, you could make a worse deal.