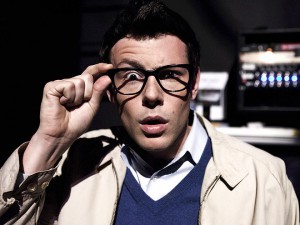 This past Friday I lost my virginity. Or at least that’s what Rocky Horror fans call it when someone sees their first midnight showing of the film…and in honor of the upcoming 35th anniversary of the movie that’s exactly what this writer did on Friday. I was lucky enough to witness the official New York Shadowcast of The Rocky Horror Picture Show – what is a “shadowcast” you ask? A shadowcast is a group of unbelievably lewd, brave and uninhibited souls that dedicate their Friday and Saturday nights to faithfully recreating the entire RHPS film.

And it just so happens that this shadowcast isn’t the only group of people recreating RHPS, in fact a talented group of “high-schoolers” will be recreating it on Fox this Tuesday. The cast of Glee will be paying homage to RHPS in the best way imaginable…through song. The music featured in the upcoming Rocky Horror episode was released last Tuesday as a 7-track set. The performances are great; it showcases how Glee’s creator Ryan Murphy can breathe new life into the 35 year old soundtrack. While the music and tone stay relatively faithful to the original, it isn’t without its differences. For a film about “Sweet Transvestites” from the planet Transsexual, the politically correct lyrical changes seem a bit superfluous – for example, the aforementioned planet of Transsexual has been changed to “Sensational”…go figure. I guess George Carlin should have expanded his list of words you can’t say on television to 8.

So be sure to tune in for Glee’s Rocky Horror episode this week and be double sure to check back for my review. Also, if you’re a fan of either Glee or Rocky Horror keep your eyes and ears open, ‘cause word on the street is that Ryan Murphy is being primed to remake the 35 year old classic…whether it comes to fruition or not is yet to be seen, but you can definitely count on ReviewSTL to keep you updated.