THE RAM’S ROAD RECORD GET EVEN MORE WINDING AND LONGER!

It is funny that the only game we could win last year was in Detriot, and now this season we are getting into a habit of giving road victories away. We have bl 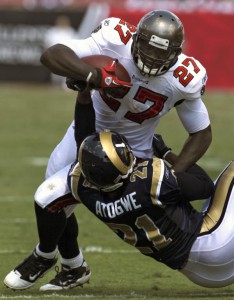 own 2 of 3 road games this season, in Oakland (16-14) and just yesterday in Tampa after dominating the first half we packed it in at half only to lose with 10 seconds left 18-17!

This is a nasty habit the team is developing, jump out to a big lead and coast the rest of the game and let the defense hold on for a victory. that strategy stands at 1-3, we did manage to beat San Diego 20-17 but not the Cardinals, Raiders and now the Buccaneers. I am not blaming our defense even though virtual unknown runningback LeGarrette Blount run over us in the second half for 72 yards and allowing Tampa just 2 field goals in the third quarter. 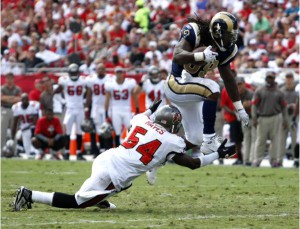 After dominating the clock and the Bucs in the first half the rams could hardly manage a first down in the second half.  the rams started the second quarter with Josh Brown kicking a tying field goal then proceeded to run off 14 unanswered point to lead 17-3.

The highlight of the first half belong to Ram’s runningback Steven Jackson (@sj39) who grab the last 38 yards he needed to pass Eric Dickerson as the Ram’s leading rusher of all time! Congratulations Steven! 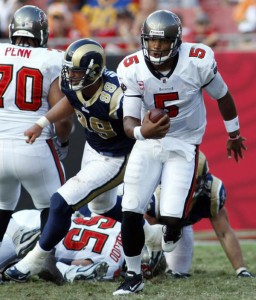 The Bucs closed out the half by adding a field goal trailing the Rams 17-6.

The Second half was all Tampa Bay and with 2:20 left in the game Josh Freeman was poised to bring home his fourth comeback win of the season. Tampa manage to move down the field and with 10 seconds left on the clock, freeman passed the ball to Cadillac Williams in the endzone for the winning Touchdown! Tampa Bay scored 12 unanswered point in the 3rd and 4th quarter, while the rams offense sat and watched, to win the game and take over the top spot in the NFC South! 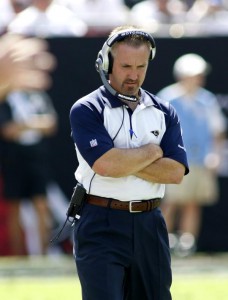 Note to Coach Spags and the offensive coaches: 17 points will not win every game in the NFL! Score until the clock reads 0:00! Put together four solid quarters of football…please!

We have the 1-5 Carolina Panthers trick or treating their way into town this weekend, fresh off their victory over the San Fran Fourty-Winers (thanks!). So we need to keep our Dome Field Advantage going and put a whooping on this very bad football team and bring us back to .500 at 4-4. The Dome is virtually sold out with only a few tickets remaining as it is also Issac Bruce’s retirement game. Get there early as they will enshrine Issac in the ring of honor with an on field ceremony at 11:30am.

I am Ram Man and I will see you at the game and as always in the endzone!