Another Take By Zac: “Easy A” 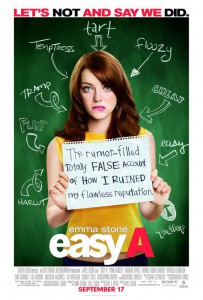 Easy A is a winning high school comedy that is sharply written, has a fantastic supporting cast, and features a breakout lead performance by Emma Stone.

Stone stars as Olive, an apparent outcast and “un-cool” high school kid that ups her status accidentally by faking having sex with her gay friend so he doesn’t get beat up anymore.  An innocent act of friendship quickly turns to an act of scandal when rumor spreads that she is the new school slut but instead of running from the act and defending herself she embraces it and begins to help other virgin boys up their status.  But as her slut rating goes through the roof things begin to get more complicated as she tries to stay sane while she is vilified by everyone at her school over a lie.

The film’s structure and plot is loosely based on The Scarlet Letter and fans of the novel are sure to find many parallels.  The film is also very referential to many other novels and teen films and while that can be a bit unoriginal and tired the film makes most of the references work.  And these references work because the writing in the film is very sharp and fairly edgy from what I was expecting from this high school comedy.  In fact, it is the best mainstream high school movie since Mean Girls.  In fact, I think I might have enjoyed this film a little bit more than Tina Fey’s wonderfully scripted film.  The films deal with similar subject matter and Easy A is able to carve out its own corner of the genre by integrating new media so well into the narrative.  The film is a bit procedural for the genre but things do stay fresh thanks to the writing and enough new wrinkles to feel new.  Sure things might tie up nice and tight, for the most part, but the story and ride is so enjoyable you won’t even mind.

The cast takes the film to the next level with the writing as it is littered with talent.  Lisa Kudrow and Thomas Haden Church are great as a pair of teachers, Church especially, and I wish they would have been in the picture even more.  Patricia Clarkson and Stanley Tucci are wonderful as Olive’s parents and provide laughs every time they are on screen.  Tucci especially shines and is as great here as he is in any of his higher profile roles.  The family dynamic is what really helps the film as well as it is both believable and modern.  Dan Byrd from Cougartown shines in his moments as the gay friend and props to the filmmakers for not creating a stereotypical gay role.  Amanda Bynes is great as usual as well and while her character is a bit limited she is able to throw some fun quirks into her performance that I have always enjoyed.  The real star of the show though is Emma Stone.  She announces her leading lady chops with authority with perfect comic timing and a carrying herself like a lead should.  I can not praise her enough and I really hope this helps push her out of the supporting ranks and into a star, because she deserves to be one.

In the end, Easy A is an easy recommendation, ugh, no pun intended, and is one of the better high school comedies to come along in a while.  The film is a coming out party for Emma Stone as a star and features a fantastic supporting cast full of Oscar nominees and winners.  The writing is sharp, the references are funny, and the film has an edge you don’t really see coming.  Hell, there is even a decent twist thrown in there at one point.  If you are looking forward to this you won’t be disappointed and if you think it looks lame I beg you give it a second chance as it is a film that can be enjoyed by just about everyone.