Another Take By Zac: Film Review: Water for Elephants 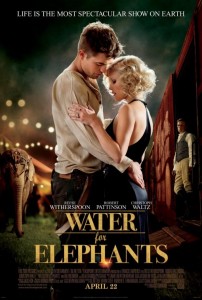 The film opens in the present day with an old man named Jacob lost at the circus as his son has failed to meet him there.  Jacob heads inside with the circus manager to help him find his way home when they begin to discuss Jacob’s background in the circus.  Flash back to depression era America where we see Jacob about to graduate from vet school at Cornell when a family tragedy leads him onto the rail road tracks looking for a new direction in life.  Stowing on the first train he sees, Jacob finds himself on the Benzini Brothers Circus transport and is quickly thrust into a job shoveling dung in trade for a night on the train.  When introduced to the ringmaster, August, Jacob reveals his veterinary background as he is about to be escorted off the train and is immediately taken under August’s wing as a smart and decent friend to have around the circus.  Jacob and August’s relationship becomes a complex one as Jacob is introduced to shady ways of the circus and as Jacob and August’s wife, Marlena grow closer.

The film’s biggest issues lie in its script which relies far too much on voice over and easy unearned emotional hooks to build character sympathy.  Anyone aware with circus conditions and the treatment of animals shouldn’t be surprised by some of the cruelty on display here but the film greatly relies on this for any sort of reaction from the audience over the course of the first half of the film.  The film also moves fast and loose with time and seems to just glance over things and never really digs into some of the issues it has to dissect.  From the cruel circus culture, the treatment of employees, and the odd cast of characters you find at a circus, the film just never really explores any of this interesting material.  The film instead relies on the three way relationship between Jacob, August, and Marlena for its emotional hook and that only works to varying levels of success.

August is played by Chritoph Waltz and he creates an interesting portrait of a disturbed and troubled man that seems truly at odds with his actions.  He can be incredibly kind and sincere one second and threatening to throw you off the train the next and Waltz captures it perfectly.  For most of the film we feel sorry for August as he tries to redeem his outbursts and I think the story cheats a bit by villainizing him so strongly in the end.  Waltz works wonderfully with Robert Pattinson and Reese Witherspoon as well as all three actors turn in some fine work.  Pattinson and Witherspoon don’t get as many big moments as Waltz but I think they both capture the characters quite well for how underdeveloped the script is.  The film’s third act hinges on such a drastic instance of misunderstanding to spark the drama of the end that you can’t help but call it a stretch which also leads the film’s attention away from its most compelling storyline, Rosie the elephant.

The scenes with Rosie are the ones that work the best, no matter kind or cruel, and the film’s final act leaves it all behind for the half baked and unbelievable romance of the picture.  Rosie is a wonderful character, full of life, and everything surrounding her works pretty great.  And while it is a shame that we get away from her and the circus, the film’s climatic scene at the circus is fantastic.  Director Francis Lawrence nails the insanity and terror of the moment that serves as an excellent conclusion to our story.

In the end, Water for Elephants is a fine enough picture but I feel like it could have been something more.  Having not read the novel it is based on I don’t know if the script cut out some of the more interesting material, i.e. circus conditions, life and characters, or if the story simply used the setting as a back drop for a rather run of the mill classic romance.  Either way, the film feels uninventive and a tad dated the instant is over and while I was pleasantly surprised with the outcome I can’t say I am going to be in a rush to see this film again.  Finely acted and wonderfully shot, there is material to enjoy here, just don’t expect some grand adaptation of a story many hold dear.

Water for Elephants is a C