Another Take By Zac: Film Review: The Conspirator 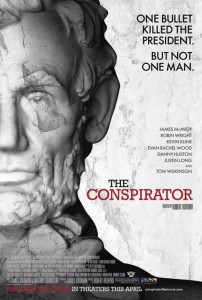 Robert Redford’s latest is a fine looking and produced telling of a fairly unknown story in American history that fails to really excel to anything more than a straight forward court room drama that serves as a parallel to our modern day travails with prosecuting through Guantanamo Bay.

Now you might ask how a movie about Lincoln’s assassins translates to an obvious condemnation of the way the U.S. is handling the prosecuting of modern terrorists.  Redford clearly has something to say and the film’s, and real life, drama surrounds defendants being prosecuted without a jury and instead by a military tribunal.  The ethics of this is something to seriously question as the officers sitting on the judging tribunal are neither unbiased nor uninfluenced by their superiors which will obviously tend to lead to unfair trials.  That is what critics of the way the government is handling the modern day situation will attest to, especially when regarding defendants that really have very little relevance to the enemies cause, and that is where Redford’s film draws its focus.

The film follows the trial of the Lincoln assassins, in particular Mary Surratt, who is being charged as a conspirator as Booth and his accomplices supposedly held many a meeting in her boarding home.  Surratt is defended by a young and whip smart ex-soldier/lawyer Frederick Aiken.  Aiken is hesitant and complacent in Surratt’s guilt, as he was a veteran of the Union during the Civil War, but is convinced by Senator Johnson. Johnson believes in a fair trial and the constitution and Aiken begins to take issue as he watches the proceedings of the court unfold.  Aiken begins to mount a strong defense for Surratt and finds a hard uphill battle to freedom for his client.

Redford’s film looks great and features an impressive cast.  The period is wonderfully recreated and seeing an in the process building of Washington D.C. always delights me on film.  The mood and tensions of the era are also crafted affectively, but the angst of the North vs. South is an understood drama of the country.  The films opening scenes are really are great as well as we see the assassination of Lincoln unfold along with the failed attempts on other officials by the conspirators.  The film, visually, never really falters.

The problem with the film is that it doesn’t do anything terribly impressive with the court room genre.  Sure the history is interesting and the politics frustrating but the legal drama can only entertain so far.  Aiken of course has a couple aces up his sleeve but any of our enjoyment is quickly undermined by the politics behind the tribunal.  The film also seems to jump in time quite frequently and greatly without ever really conveying that time is passing.  They just skip to the important parts and completely avoid the trial of the other defendants beyond Surratt.  The family drama surrounding the Surratt’s is fairly interesting and I think they do a good job of conveying Mary’s struggle to protect her son but I left the film feeling some things were left a bit unsaid surrounding them.

The actors are all in fine form here, with the exception of one, with James McAvoy and Robin Wright staring in the respective leads of Aiken and Surratt.  Both of them are great in their roles with plenty of scenes for them to show off in.  Evan Rachel Wood is good as the daughter Surratt and makes the most of her few scenes in the film.  Tom Wilkinson, Kevin Kline, and Danny Huston bring their veteran presence to the table and cement their roles effectiveness with ease.  Kline is particularly nasty as the trial puppet master Secretary of Defense Edwin Stanton.  A bunch of young stars also shine in brief moments as the conspirators with Norman Reedus, Toby Kebbell, Jonathan Groff, and Johnny Simmons all turning in fine work.  I definitely would have like to have seen more Kebbell personally as Booth.  Same goes for James Badge Dale who doesn’t get enough to work here.  The one soar spot in the cast is Alexis Bledel who is horrendous as a love interest for Aiken, truly terrible and overmatched at every turn.  And to make matters worse, the role is completely pointless.

In the end, The Conspirator is a fine period piece but fails to excel in its chosen genre.  History buffs will find plenty to enjoy but as a film, with the talent involved, one can’t help but think that the film could have been something more.  I appreciate Redford’s message with the film and I think he hits home his message quite well, I just wish his drama would have been a bit more affective.  Regardless, it is worth a watch if you are a civil war/history buff as it is a story that few have probably ever heard much about.

The Conspirator is a C+