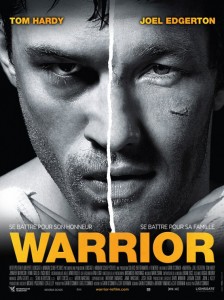 Warrior is a fine family drama surrounded by the world of MMA and works quite well on all levels and will have you on the edge of your seat in the end.

For those uninitiated, MMA stands for Mixed Martial Arts, which means, yes, this is technically a sports movie.  But those turned off by the mere mention of the word “sport” in their films need not worry.  For one, the sport isn’t hard to follow, whoever gets beat up loses; easy enough right? Second, the fighting is secondary to the family dram which revolves around four individuals.  Brendan (Joel Edgerton) is a struggling school teacher who is about to have his home foreclosed on and him and his wife, Tess (Jennifer Morrison), struggling to get by are a third of the story.  Tommy (Tom Hardy) was a talented wrestler in his youth but disappeared from his brother, Brendan, and their abusive father’s lives when he and his Mom ran away from all the abuse when the brothers were teenagers.  Tommy resurfaces years later on his Dad’s doorstep, Mom is dead and Dad is now sober, and he insists his Dad train him to get into the MMA fighting game.  The relationship is purely professional at the behest of Tommy and the third element of the film revolves around Dad, Paddy (Nick Nolte), trying to reconnect with the boys.

The themes of the film aren’t terribly original but they are all done quite well from corner to corner.  The acting is full of quality performances from all the main leads, with Nick Nolte as Paddy excelling above the pack.  Nolte has always been a great actor and he turns in another great performance here.  As an aging ex-drunk looking for forgiveness, Nolte, has a lot of mountains to climb as Paddy and he has more than a couple devastating scenes.  One in particular, on Brendan’s front lawn, was the scene of the movie for me and will not be forgotten this awards season by many prognosticators.

Tom Hardy and Joel Edgerton are both up to the task, physically and dramatically, and will impress both inside and outside the ring here.  Hardy is a loner and the quiet type here, but when that adrenaline gets going in Tommy, look out, Hardy comes out flying.  Edgerton on the other hand carries the reserved and cool personality through both elements of the role and he is an easy underdog to get behind.  The film does make it a bit easy getting Brendan into the tournament, but I am not going to stress out to much over it.

The film’s pacing is solid but you still feel the film’s length a bit.  The fights are fast, few, and far between until the third act, so don’t go in expecting non stop head bashing.  The fight scenes are well executed though and the final fight is a fantastic finish for the tournament and film.  The film also doesn’t try and resolve things with everything being all sunshine and roses either, and even though the plot is a contrived set of coincidences, most everything feels quite earned.  The film doesn’t bring a whole lot of new to the genre’s table either, other than the MMA setting, but that doesn’t keep the film from being very enjoyable by any means.  The film’s director, Gavin O’Connor, knows the strengths of the genre and lets his actors suck us in and do the heavy lifting to keep us engaged.

In the end, Warrior is a solid and entertaining sports flick that makes the most of the genre’s strengths and features some great work by its actors.  Nolte is a standout, the action is great, and the family drama is engaging enough for those showing up for the head punching to stick around.  Warrior is a good choice for any film fan this weekend and is part of a solid start to the fall movie season this September.

Warrior is a B