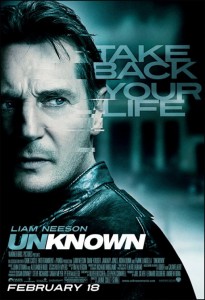 Unknown is an interesting and well made film that shows it’s cards maybe a bit too soon and doesn’t take full advantage of the doors it opens.

Liam Neeson stars as Dr. Martin Harris who is visiting an agro-business summit in Berlin when he is involved car crash.  Waking up four days after the accident, Harris, has sustained some memory loss but seeks out his wife, Elizabeth, who hasn’t come to his side.  He is only to find that she doesn’t recognize him and someone else is on her arm claiming to be him.  Harris begins to regain some of his memory and dives head first into proving he is who he says he is and finds himself being hunted down in the process.

With the premise of Unknown being what it is, viewers are predisposed to being searching for any clue that might give away the films end game.  The first half of the film does a good job of hiding its cards but a quick succession of scenes allowed me to put things together ambit before the reveal.  Now this is fine as the twist is quite clever and I was intrigued to see where they were going with this thing, I just don’t think they took full advantage of what they set up.  To discuss more would be spoiler but don’t let the fact that the film’s twist might not be mind blowing shy you away from the picture.

Director Jaume Collet-Serra does a fine job of putting together a well paced and fine looking film on top of a very fine cast.  Action junkies should be satisfied with a fine car chase and a couple of good fisticuffs, plus there is plenty of good tension sprinkled throughout.  While the film never really cheats its premise, it all unfolds a bit too easy at the same time.  Harris’ ability to elude his pursuers and who they work for seems quite preposterous, especially when considering Harris’ condition and the relationship he forms with the girl who crashed the car that put him in a coma is equally suspect. All that said, the film is mostly enjoyable and a fun watch, I think that most of my issue with the film’s third act stems from the fact that it didn’t go they way I hoped; which was actually probably more plausible.

Neeson is ok as Harris here but he has given us far more fun and energetic performances in his previous action efforts over the last couple years.  Harris just seems too nonchalant and doesn’t show the sense of urgency the situation demands.  Neeson could have been far worse, but has been exceedingly better.  January Jones is also too paint by numbers in the role of Elizabeth and really gets absolutely nothing to do in the film but smile and look pretty; oh well.  Diane Kruger, like Jones, gets very little to work with as well and her character goes along for reasons I never really buy into.  This is no fault of Kruger’s; she just doesn’t have a well realized character.  Bruno Ganz is the most interesting cast member as an ex-Stasi that helps out Harris but his characters motivations to help aren’t properly validated and he serves more importance to the twist than anything.  Criminally underused is Sebastian Koch who gets to next to nothing to do which is surprising considering how vital he is to the plot.  Frank Langella is also under used in a small, but vital, role; just wish he had more to do.

In the end, Unknown has a good twist but doesn’t have the characters and story to really make it soar.  While a fun and easy ride, it doesn’t demand much from the viewer and doesn’t try to exceed your expectations either.  The film is worth a watch if interested, but waiting for home video isn’t a bad idea either.

Unknown is a C+