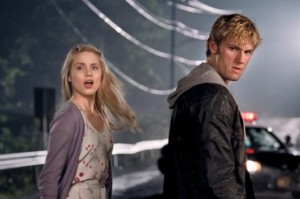 I had zero hope for I AM NUMBER FOUR.  I saw the trailer, and immediately dismissed it as teenage action that would be far too teen angsty.  Now seeing the film, I can say that I was partially true.  The film is very much a teen action flick that high school kids will most likely gobble up.  But surprisingly, I had a fun time along the ride.

The film stars Alex Pettyfer as John, an alien species who is sent to Earth after his home planet is destroyed.  John and his protector Henri soon must pack up their lives when John realizes he is the next of his species being hunted.  John enters a new town and new school where he is told by Henri to lay low.  But when John discovers new powers from within him, it becomes hard to lay low.

One of the best things about the film are the action pieces.  Director D.J. Caruso has shown with EAGLE EYE that he can handle big action, and this film continues to showcase that fact.  The film opens with a decent chase through a jungle, and just continues to build in action all the way to the big finale.

I also really liked the acting from all of the major members of the cast.  I think that Pettyfer is lucky that BEASTLY was delayed because I think this is a much better debut for him as leading man.  I have been a big fan of Timothy Olyphant for a while, and he doesn’t disappoint here.  Diana Agron shows enough here to establish that she may be destined for quite a career outside of GLEE.

My biggest complaint about the film is an extremely rushed love story between Pettyfer and Agron.  I’m sorry, but no girl would ever ask a guy to have dinner with her family after meeting earlier that day.  While their are plenty of other things you can nit pick about, just accept the film for what it is and nothing else is really going to be that distracting.

The film isn’t perfect by any means, but it is leaps and bounds better than the TWILIGHT SAGA.  I read a recent interview with star Alex Pettyfer in which the interviewer called the film a mix between X-MEN and THE OC.  I love the comparison and couldn’t agree more.  I would suggest the film for anyone under 30.  I’m not sure if anyone older would have as much fun.  Just go into the film understanding what it wants to be, a fun action film aimed for the high school crowd, and that is exactly what you will get.