Another Take By Zac: Film Review: The Tourist 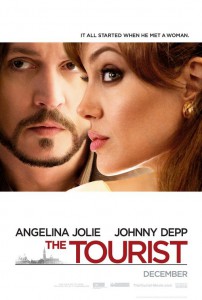 The Tourist takes its two super stars, Depp and Jolie, and uses them effectively to craft a somewhat odd amalgamation of genres that all feel a bit lite, yet still work.

Jolie plays Elise, a Brit roaming Paris who is under surveillance constantly by the British governments with the hope that her wanted beau will show his pretty new face to see his love.  When she gets a letter at her usual café from her estranged lover to find herself a random stranger on the train to Venice and convince her pursuers that this stranger is the man they are looking for.  That stranger is Frank (Depp), and he is an American math professor on holiday that is more than happy to follow around Elise like a puppy at her beckon call.  Before you know it a third party of mobsters gets involved as they want Elise’s man dead and Frank finds himself in a lot of trouble.

The film has a bit of humor, a bit of action, a bit of romance, a bit of crime, a bit of intrigue, a bit of mystery and it almost adds up to an entire movie.  Unfortunately that movie also only has a bit of a plot and while that is fine the film is built around not very much at all.  Thankfully the filmmakers don’t drag things out and while the film casually moves along its own pace it manages to remain interesting through its eight or nine scenes.  Really, eight or nine, that’s about it; and it’s not a big deal.  It works.  Things aren’t terribly complex or compelling but they are entertaining and pretty look at which only helps the matter.

Sure, Florian Henckel von Donnersmarck’s American debut isn’t anywhere near the brilliance of his debut, The Lives of Others, but this film is a decent start for him in the Hollywood system.  Donnersmarck’s talents do not lend to terribly exciting action set pieces here, both here are snail like and rather dull, but his eye quite beautifully captures the vistas and stars.  The creative team’s choice on tone is another odd conundrum in the film because the drama and comedy works when they throw it out there, but the film seems like it never really knows what kind of movie it wants to be.  Jolie’s Elise is dead serious where as Depp’s Frank is a bit goofy and a much lighter affair when we focus on him.  When they are apart they seem like they are in different films, together they some how blend together into a still entertaining film, you just kind of wish they would have locked into one or the other and ran with it.  One last major thing not helping the film was a score by James Newton Howard that is just all over the place and never fits in with the picture.  This could partially be the lack of a through tone for the picture but to say the least I wasn’t a fan.

The actors in the film do some fine work though no one does anywhere near the best work of their career.  Jolie doesn’t do much different than her mysterious femme fatale role she does so well, though we don’t get to see he kick much ass, and she gives Elise a bit of depth that the script calls for.  Depp on the other hand makes his biggest departure from his weird self in some time but still seems to be having some fun as a goofy American running amuck in Venice.  Paul Bettany is wasted in a straightforward agency role that doesn’t allow him to do much of anything; same goes for Rufus Sewell.  Easily taking the cake as the weakest link of the cast is Steven Berkoff who plays one of the worst and least intimidating villains I have ever seen in a film.  Really hurts the overall impact of the film as he is so non-threatening.  This and the score really hurt the film more than you would think.

In the end, The Tourist is a fun little star studded affair that you can easily enjoy even if it is a bit confounding at times.  It is a back and fourth match with the tone and you can never really settle into what type of film it wants to be.  Fans of Depp and Jolie will have plenty to like as they are in every scene but both have done far better work.  There is a third act spin that is a bit hard to chew but I had a good enough time to not worry about it all that much; and I don’t think they really cheated either anyways.  If interested don’t be afraid of The Tourist and if mildly intrigued I still think you can find some fun in the picture; just be ready for anything.

The Tourist is a B-