The Chronicles of Narnia: The Voyage of the Dawn Treader 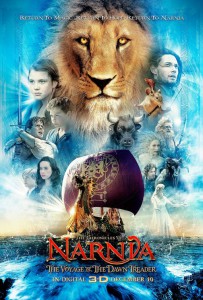 The Voyage of the Dawn Treader picks up not far after Prince Caspian. Although, this time only half of the Pevensie children make the journey into Narnia. Peter and Susan, the oldest Pevensie children, had a loss of innocence as they are entering adulthood, and are no longer allowed in Narnia.  While Susan and Peter are off in America, Peter and Lucy are left in Britain with their annoying cousin Eustance. Their cousin is overly practical, overly logical, and does not believe in the “fairy tale” of Narnia. It isn’t until the viewing of a painting of a ship at sea, that Eustance is forced to believe in Narnia, only because he is forcibly pulled into it.

Upon arrival Lucy, Peter, and Eustance board the Dawn Treader, the personal sea vessel of Prince Caspian. Only a short time had passed since their last visit (unlike the hundreds of years between the previous films), but Caspian is on a mission that might require the help of the king and queen of old.

It has become quite apparent with the third film of Chronicles of Narnia, that while it may have been pushed into theaters as a replacement for Lord of the Rings, it is not a suitable one. Its allegorical themes come too heavy handed on film, and come off trite rather than imparting any wisdom.

One of its biggest problems is the special effects, which is not helped by the 3D conversion, which makes everything look twice as fake and plastic as before. Where Harry Potter and Lord of the Rings have fully realized worlds that seem to flow with history, and have a sense of having been lived in. Narnia looks like a half realized dream, that hasn’t gotten past its full conceptual meaning.

It probably isn’t fair to compare Narnia to these other film series, but it is hard not to. They are marketed to similar audiences, and they obviously are trying to fill the same role. The series has yet to cut its own path, and separate it from its original source material or the series is so very wants to be.

Even the acting doesn’t have much of a bright side. The main cast is filled with young talent who show plenty of potential, but are instead trapped in clichéd moments that never fully explore their characters. There is a lot of room for growth in the characters, but the story is often trumped to show a new fantastical element to Narnia.

If you are a big fan of the C.S. Lewis novels, you might have a bit of interest in seeing characters brought to life. However, if you haven’t read the books, you’ll likely be wondering what all the fuss is, and when is The Hobbit going to come out?